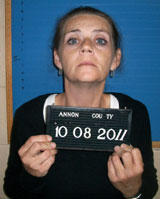 Two Murfreesboro women have been charged after they allegedly attempted to get morphine pills to an inmate in the Cannon County Jail via a shampoo bottle.

Cynthia Ann Ennis, 4962 Bradyville Pike, Murfreesboro and Jessica Ramey, 941-A Twin Oak Dr., Murfreesboro, were each charged with Introduction of Contraband into a Penal Institution and Delivery of a Schedule II Controlled Substance by Cannon County Sheriff's Deputy Eric Moss.

On Oct. 8 at approximately 3:30 p.m., Deputy Moss was informed by Corrections Officer Erin Fann that she had discovered contraband in a shampoo bottle that had been left at the jail for an inmate by someone that had just left from visitation.

Officer Fann informed Deputy Moss of the vehicle that was being driven and that it was leaving the jail at that time. Deputy Moss was able to make contact with the vehicle at Stones River Hospital and asked the driver, Ennis, to accompany him back to the sheriff's department. He escorted Ennis and a passenger, Ramey, back to the CCSD and they were seated in the lobby.

Officer Fann pulled five capsules, which were later determined to be morphine, from the shampoo bottle.

At that point Deputy Moss placed Ennis under arrest.

The grandmother of Ramey's infant child, Lisa Bailey, arrived at the jail and stated to Deputy Moss that she had heard things around the house about Ramey being mixed up with prescription drugs. Bailey said Ramey was buying and selling drugs and that she had heard Ramey state it was the only way she could make money.

Ramey was then arrested and both she and Ennis were turned over to booking. Ennis' cash, totaling $468.61, was seized due to the felony charge and she was issued a notice of property seizure and forfeiture of conveyances.