International President-Elect Sid Scruggs
Will Speak At Celebration Monday, May 10 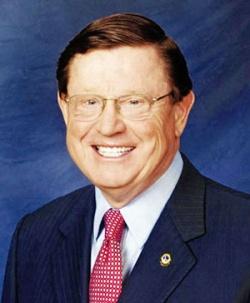 SCRUGGS
Visiting Lions from across the state will join the 114 members of the Woodbury Lions Club and their spouses to celebrate the seventy-fifth anniversary of the club’s chartering in June, 1935. The gala event will take place on Monday, May 10 in the Fellowship Hall of First Baptist Church beginning at 6:30.

Sid Scruggs III, President-elect of the International Association of Lions Clubs will be on hand to commend and congratulate the club for its distinguished record of humanitarian service.

Scruggs, of Vass, North Carolina, USA, will be elected as the 93rd President of Lions at the annual international convention in Sydney, Australia on July 2 of this year.

A member of the Vass Lions Club, he has held many offices within the association, including club president, multiple district extension chairperson and district governor. In addition Vice President Scruggs has been a presenter at the USA/Canada and Europa Leadership forums and an instructor for the Lions Clubs International Leadership Institute and the District Governors-elect School. He is actively involved with dog guides for the blind.

In recognition of his service to the association, Vice President Scruggs has received four Lion of the Year awards, the 100% Club President Award, eight New Club Extension Awards, the Governor of Excellence Award, the Key of Nations Award, an International President’s Leadership Award, eight International President’s Awards and the Ambassador of Good Will Award, the highest honor the association gives to its members. He is a Progressive Melvin Jones Fellow.

In addition to his Lions activities, Vice President Scruggs is chairperson of the board of directors of the Governor Morehead School, a member of the board of the Raleigh Lions Clinic For the Blind, Inc., and a life member of the American Airlines Greg Eagles Association and the Naval Academy Alumni Association. He was presented with the Order of the Long Leaf Pine, the highest award given by the State of North Carolina. He has also received an Honorary Doctorate of Humanities from World University.

Vice President Scruggs and his wife, Judy, also a Lion and Progressive Melvin Jones Fellow, have four children and 15 grandchildren.

Woodbury Club president Danny Miller will call the celebration meeting to order. Later club president-elect Sue Patrick will introduce the guests and, after a bountiful dinner is served Past International President Austin Jennings will introduce the guest speaker. Past International President Edward M. Lindsey of Lawrenceburg will respond to the speaker’s remarks and Chancellor Robert Corlew, District Governor, will install the 2010-11 officers of the Woodbury Club.