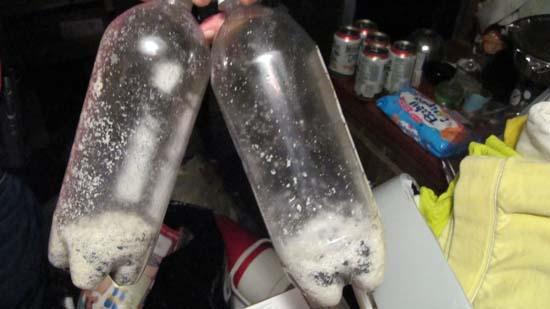 A woman reported her husband was exhibiting strange behavior on May 14, and soon after he was charged with meth-related offenses.

Cannon County Sheriff’s officers were called to 5962 Pleasant View Rd. on that date. Once there they spoke with a woman who said her husband, John A. McPeak, was acting funny.

After receiving permission to search, deputies opened up several trash bags outside the residence and found inside several components used for making methamphetamine.

McPeak, who was not at the residence when officers arrived, was located at the end of Pleasant View Rd. by Sheriff Darrell Young.

Upon searching the vehicle McPeak was driving, officers found methamphetamine, a one-pot meth lab, drug paraphernalia and a back-pack full of components used to manufacture the drug.

McPeak was charged with possession of a controlled substance with intent to sale, initiating the process to manufacture methamphetamine, maintaining a dwelling for the use, keep or sale of drugs, simple possession / casual exchange of drugs and possession of drug paraphernalia.

McPeak’s bond was set at $212,500. He was appointed an attorney in General Sessions Court Tuesday. His next court date is July 12.

In addition to Sheriff Young, Investigator Anthony Young, Deputy Eric Moss and Deputy Lawrence Avera participated in the investigation and arrest of McPeak.