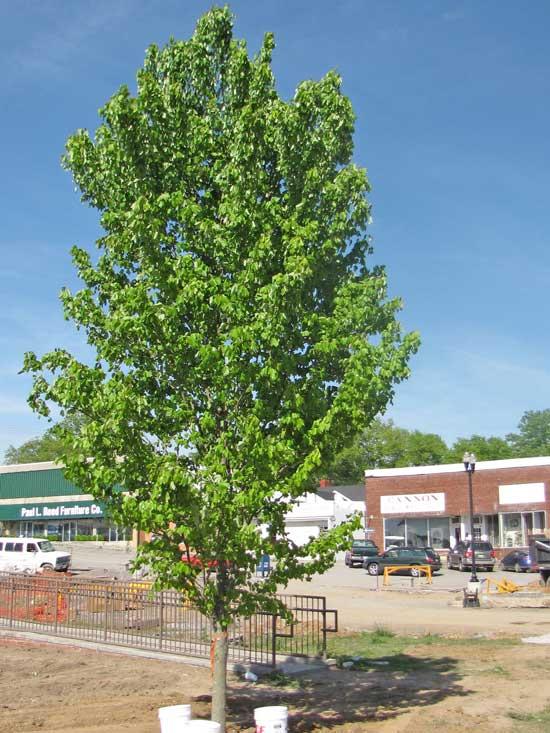 Thursday, Huff and Puff trucking out of Bradyville delivered eight beautiful Brandywine Maples to the courthouse square. County Executive Mike Gannon was outside to receive delivery of them. Along with him were twelve minimum security prisoners from the Cannon County Jail with their supervisors.

Huff and Puff backed up into the north side parking lot, unhooked the trailer and the prisoners started to uncover the trees. There were great big balls of dirt with the trees and they began to unload and plant them; having one set out before three o’clock.

This is all of trees coming to the courthouse and they will be placed in similar areas where the former trees were set. The trees cost $300.00 a piece and are approximately 20 to 25 feet high.

Mike Gannon told the Courier that Preston Brothers say they will be complete by July 1. All of the underground work is done in the interior of the court square and the yard along with the paving of the lot and streets will be the last thing to do. “There are a lot of things left to do, but you will see a day to day change,” said Terry Preston.

Everyone is interested in seeing this project completed to bring normalcy to the square and start bringing in people from outside the county to see our beautiful historic square. Carroll Wayne Nichols wants to be the first person under the trees to sit and whittle.

The local inspectors for the construction project are from left to right; Ovie Hollis, Dennis Bromely, Buddy Francis and Ralph Reed. Their office is the bench in front of Joes' Place.

Print
Members Opinions:
ladyreader
[Delete]
The outside of the courthouse will look great, i'm sure. What about the rusted out windows in the courthouse? They are truly an eye sore. Shouldn't replacement windows be part of this "revitilization"?
CannonCourier
[Delete]
The grant money for the project can only be used for the work being done to the exterior area of the courthouse, not the building itself.
tloftus
[Delete]
I think it could be done alot faster if there were more then 2 people out ther working everyday. I watch this everyday for I work on the square. They do not start untill after 8 in the morning and are gone must days befor 4 in the afternoon.