How Technology Can Reunite You With Your Pet 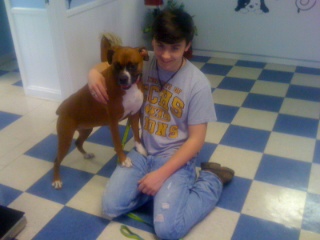 There are a lot misplaced animals in our community; however, because of a permanent identification personal microchip a lost dog and her family were reunited yesterday (Monday).

Honey is a six year old Fawn Boxer with a dynamite personality. Her beauty triggered a Murfreesboro man, name unknown, to pick her up out of the middle of Thompson Lane traffic on Sunday afternoon. The man could not keep the dog due to having a dog of his own. He was unaware of the Rutherford County PAWS program, therefore he called upon his brother to take the dog.

His brother took Honey home, fed her dinner, and put her to bed. Honey is used to sleeping with her owner, so she persisted in getting in the bed to spend the night under the covers. The brother's wife, Mrs. Wendy Sadler of Woodbury, noticed that the dog was very well cared for and wondered if the original owner could be located.

On Monday morning, Mrs. Sadler came in to the Woodbury Veterinary Hospital at 102 N. Dillon Street to find out more information on locating the owner. Dr. Lewanda Lance and staff explained to the owner that without permanent identifier, if no tag there was no way to trace the animal.

Dr. Lance and staff offered to scan the dog with their Bayer Resq scanner, because it reads all previously used and current frequencies of Microchips. Honey had a chip, a really old 10 digit HomeAgain microchip, but the owner never registered her in their system. HomeAgain gave them the number to the main office for the pet store Honey was sold at as a puppy.

Woodbury Veterinary Hospital communicates with their clients through a Facebook page and their website www.woodburyveterinaryhospital.intuitwebsites.com. With the owner's name and general location the staff plugged the names in and found them, but the telephone number on Facebook had been changed. They then decided to look and see if anyone knew any of their friends.

The owners, Kristi and Shane Williams, were friends and clients of Dr. Belinda Mendenhall, whom the staff of Woodbury Veterinary was familiar with. A quick cell phone call made a long day's work worth it! Dr. Mendenhall had their current information. Dr. Lewanda Lance and staff notified the Williams of Mrs. Sadler finding Honey.

Honey was reunited using her microchip and resliance. This family would have never gotten their dog back without the microchip that wa inserted as a young pup.

Print
Members Opinions:
[Delete]
such a heartwarming story,so nice of u guys to go xtra step to find owner.good job!!!!!
ll3137
[Delete]
Great job!!!
goober
[Delete]
Honey and the Williams are lucky she ended up in the hands of caring and competent people.
[Delete]
Since the micropchip helped my sister fine Honey's home I am DEFINITELTY getting my puppies microchips! Yall did an AMAZING job!
tanhopper
[Delete]
DR Lance and her staff are great people, their care for their patients and the family members.