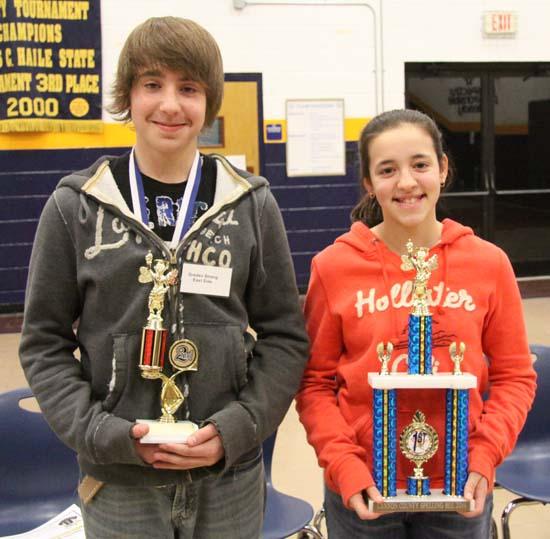 Katie Hoskins was hoping for a rematch with her older brother, Jake, in the finals of the 2011 Cannon County Spelling Bee, held at East Side Elementary School Thursday (Feb. 3).

Katie Hoskins did not get the showdown she anticipated but the thriving East Side seventh-grader did get the favorable result she wanted after successfully spelling temporal. She beat out Graden Strang, also a seventh-grader at East Side, who fell from victory after misspelling angelic.

“Winning the (County Spelling Bee) is pretty good because most people don’t get this far,” Hoskins said. “I was a little nervous but not too much because I felt good about the words. I had really studied and tried to learn as many words as possible.”

Hoskins will represent Cannon County, along with Strang, in the Tennessee State Spelling Bee at Belmont University, March 2.


“I’m proud of all the students,” said East Side language arts teacher Gay Burger. “All of the students studied hard to reach this point and they all should be proud of their accomplishments. It is difficult to make it as far as some of them did. The words are very difficult.”

Katie Hoskins finished runner-up in 2010 when Jake Hoskins edged her out for the top spot. The Hoskins appeared well on their way to a repeat showdown this year when they were among the three finalists, along with Strang.


“I was hoping to get to the final against (Jake),” Katie said. “I thought it was going to happen that way again but it just didn’t work out. He will get no sympathy from me because I don’t remember getting any last year.”

By the third round of the Cannon County Spelling Bee, 21 of the 24 students participating had been eliminated. Jake Hoskins went out in what had to be considered a mild upset following the third round, leaving Katie Hoskins and Strang to battle for county spelling supremacy.

The classmates battled back and forth, word for word, through seven rounds before Strang finally stumbled. Per spelling bee rules, Katie Hoskins still had to spell her word correctly in the eighth round in order to win – which she did. Had Hoskins slipped, then she and Strang would have continued.


“I felt comfortable with the words,” Strang said. “I studied several times a night and memorized words as best I could. That’s pretty much all you can do to get ready. Mrs. Gay does a great job working with us and making sure we study and learn the words to prepare. It’s pretty exciting to get to move on to the next round.”

Students from Cannon County’s six elementary schools who finished in the top five of their respective school’s Spelling Bee were eligible to participate in the County-wide Spelling Bee. Of the 30 eligible students, 24 participated.
Read more from:
CANNON COMMUNITY
Tags:
None
Share:

Print
Members Opinions:
Lesa.Davis
[Delete]
Way to go Katie...So proud of you.
[Delete]
ralphnemeth, to the best of my knowledge all students in all schools were given the same "breaks." I waited a few days before approving your post to look into the situation. All schools in the county had the same opportunity to acquire the word list from the Scripps National Spelling Bee web site. More information is available at http://www.spellingbee.com/