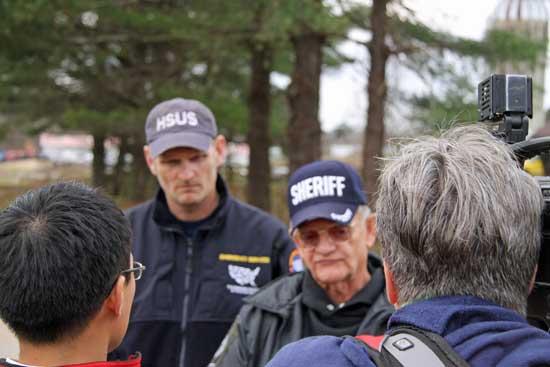 In addition, over 80 horses and scores of dogs, goats, chickens and other animals were also removed from the property of Charles Eugene Howland and Charles Clint Howland, both of 11390 Jim Cummings Highway.

The animals were seized by the Humane Society of the United States following an investigation by the sheriff's department and the Tennessee Department of Agriculture.

Scotlund Haisley, Senior Director for Emergency Services for the Humane Society, said dead and starving horses, totaling approximately 84, were found on the property.

Officials found at least 15 dead horses on the 100-acre farm.

The surviving horses were to be transported today to the Tennessee State Fairgrounds in Nashville for care and treatment. Some had already arrived there late this afternoon.

"It's one of the worst cases we've seen," Haisley said. "It's a clear case of animal cruelty."

Cannon County Sheriff Billy Nichols said the Howlands were arrested because they refused to cooperate with Humane Society and sheriff's investigators and would not allow them to search certain areas of their property. A search warrant was obtained prior to the removal of the horses and other animals.

"We tried to do it (property search) without a warrant, but they wouldn't let us look everywhere on the property," Nichols said. Initially the Howlands had agreed to a search of their property, Nichols said.

A court date for the Howlands has been set for Dec. 8 in General Sessions Court.

Haisley said many of the horses seized had open sores, were emaciated, and starving.

Nichols said the Howlands will each be able to post bond once they are processed, and that the initial charges against them are a misdemeanor. He added the investigation was on-going and that additional charges may be filed.

Haisley said the horses are in poor health and the farm is littered with 15 animal carcasses.

The Humane Society said many of the horses were emaciated and suffering from a variety of medical ailments including overgrown, infected hooves and parasite infestation.

Both of the Howlands face 84 counts of misdemeanor animal cruelty charges.