Horse Starvation Case Continued Until May 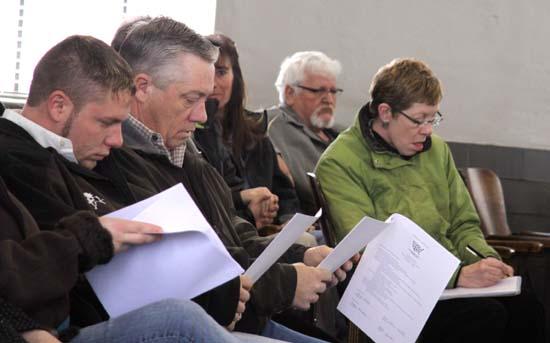 Two Cannon County men charged with cruelty to animals in a case involving nearly 100 animals, the majority of them starving horses, appeared in court Tuesday.

Charles Eugene Howland and his son, Clinton Howland, both of 11390 Jim Cummings Highway, were granted a continuance of their case until May 18 in Cannon County General Sessions Court Tuesday by Judge Susan Melton.

Shelbyville Attorney John Norton, who is representing the Howlands, has filed a motion seeking discovery in the case, which was filed by the Cannon County Sheriff's Department.

The Howlands were arrested on Nov. 24 after the discovery of 84 dead and dying horses on their Woodland property.

The case sparked huge statewide and national interest at the time as over 80 horses and scores of dogs, goats, chickens and other animals were also removed from the Howland's property.

The animals were seized by the Humane Society of the United States following an investigation by the sheriff's department and the Tennessee Department of Agriculture.

Scotlund Haisley, Senior Director for Emergency Services for the Humane Society, said dead and starving horses, totaling approximately 84, were found on the property.

Officials found at least 15 dead horses on the 100-acre farm.

Cannon County Sheriff Billy Nichols stated at a press conference on Dec. 1 that the case began November 19 when a concerned citizen reported the starving animals to the Sheriff’s Department. Deputy Anthony Young began the investigation which later escalated in the rescue effort on Tuesday, November 24.

The rescue operation combined the work of many agencies, Bruce Steelman from the Cannon County Extension Office, Agent Phil Fedun with the Tennessee Department of Agriculture Livestock Division, US Humane Society Tennessee State Director Leighann McCollum and the many volunteers.

The Howlands subsequently surrendered the surviving animals to the Humane Society. Most have since been adopted.

Because of current Tennessee law, the charges the Howlands face are misdemeanors. However, Rep. Janis Sontany has announced that she plans to draft a bill designed to include starvation of any animal in the felony penalty statutes. Currently only dogs and cats are included in the felony statute for starvation.