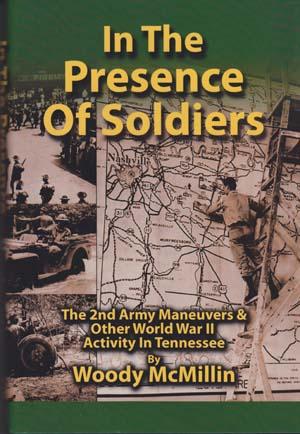 In the Presence of Soldiers, a new book by Tennessean Woody McMillin will be discussed by the author at the Auburntown Historical Society on Feb. 17, with a book signing to follow.
Auburntown and Cannon County’s role in Tennessee’s World War II Maneuvers is the subject of a free program to be presented by author Woody McMillin, at 7 p.m. on Thursday, Feb. 17, at the monthly meeting of the Auburntown Historical Society.

From 1941 to 1944 the U.S. Army conducted seven large-scale maneuvers across most of Middle Tennessee, involving more than 800,000 soldiers in series of simulated combat operations. McMillin’s new book, In the Presence of Soldiers, is an unprecedented account of the massive 2nd Army of Tennessee Maneuvers in which 25 airborne, infantry and armored divisions practiced and refined their deadly skills in the backyards of civilians.

“Many local residents remember this time period, and they are especially encouraged to attend the lecture,” said Mary Hughes, president of the Auburntown Historical Society. “Woody McMillin spent two years researching and interviewing, collecting hundreds of stories from these who lived through this challenging time in our history.”

McMillin noted that two soldiers were killed in July of 1943 in a tank accident near Auburntown, during the fouth of seven maneuvers. One was Jerres D. Morrison of Clarksville and the other was Eugene F. Novotny of Cleveland, Ohio, and they were most probably from the 10th Armored Division, according to McMillin.

Hughes said that the book offers explanations of every operation with information about where and when the action occurred, divisions and units involved, mission objectives, tactical issues air support and results. It also describes what happened to divisions after they left Tennessee. Much of this information was gleaned from now-declassified National Archives documents.

“The personal recollections of soldiers, war workers and civilians interwoven throughout the narrative helps to recreate the emotions of the time,” Hughes said, adding that McMillin’s broad telling of the story of the Tennessee Maneuvers helps to preserve and record the actions of everyday men women and children as well.

The 498-page book contains 28 pages of photos, most from the National Archives and unpublished until now.

“While I don’t pretend to be a scholar, I’m hopeful that this book preserves an important element of the WWII years and a good read for those who appreciate history,” said McMillin, who will be autographing books after the meeting.

For more information about the book, email woodyair@comcast.net.

The program begins at 7 p.m. at Auburntown Church of Christ Fellowship Hall and is free and open to all. For more information about the Auburntown Historical Society visit www.auburntowntennessee.blogspot.com.

Print
Members Opinions:
[Delete]
GO AUBURN
dailyreader
[Delete]
The articles about the maneuvers printed in the Courier have been most interesting. In the recent article the writer speaks of the hospitality tendered these men by a great many Tennesseans, including those of Cannon County.

One act--A brother of mine took part in these maneuvers and received a promotion along with another member of his company.
Obtaining an evening pass the two celebrated that occasion by wining and dining in one of the better restaurants in Nashville.

When ready to leave, they asked the waiter for the check. The waiter said the couple dining next to them (already gone) had picked up the tab.

My brother, not residing in Tennessee, told me this a number of times to remind how kind and thoughtful the people were in this area.

Interesting--the soldier accompanying my brother on that dining out experience was the late and great baseball pitcher--Warren Spann.

The combat engineering battalion they were in was front and center in bridging the Remagen River. Spann received a Bronze Star along with a Purple Heart. My brother had just driven a two half ton off that bridge when it collapsed and almost two dozen men were killed and injured.

Should be an interesting program.


Wayne
[Delete]
Another book on this subject entitled
'With Second Army Somewhere in Tennessee"
by the late Eugene H. Sloan is also a great
account of this period. Full of pictures and events.
[Delete]
This is an excellent series and it brought back memories of my great grandmother telling me stories of soldiers coming by her house during the maneuvers.

They would stop in for a home cooked meal instead of the Army food and they would find a way to pay her back with rations of sugar and coffee that they could sneak back to her.

I crawled up and over many of the remnants of the foxholes dug during that time period while growing up as a boy. I own the property now and that makes it even more sentimental.

It has brought back some wonderful memories!