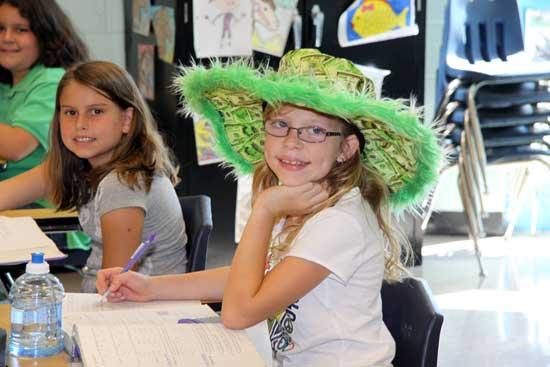 Fourth-grade student Alana Whited wore one of the more interesting hats for Hats On Day.

Hats On Day is a national fundraiser for Foundation for Children with Cancer. Students are allowed to wear a cap or hat to school on this day for a $1 donation with all of the money going to support children with cancer.

“Children understand that they do not wear caps or hats in school so this promotion certainly brings awareness to childhood cancer,” said Auburn Principal Melinda Crook. “We had great participation at Auburn School and our children enjoyed being part of it. They know they are helping and are part of helping something very, very important.”

Students not only wear a cap or hat on this day but they also receive a sticker showing they participated in the fundraiser. Hats On Day is a symbol of the fight and the struggle of all kids who battle cancer and its devastating effects. It is an enlightening experience for students who do not understand why one of their classmates lost their hair, or misses extended periods of school. It is a rallying cry for the community to show support for these brave kids fighting for their lives while living them everyday.

Hats On Day was founded in 1995 by four sixth-graders in St. Louis, Mo. They began the fundraiser when their friend and classmate Kevin Beffa was diagnosed with a type of childhood cancer called Non-Hodgkin’s Lymphoma. Kevin has been a bright, happy child with a passion for soccer. When he got sick, he began to miss school, had to give up his favorite sport, and lost all of his hair from treatment. Kevin also needed a bone marrow transplant, so Hats On Day was planned to show support for Kevin during his suffering and to raise money for his surgery; however, just days before the event, he passed away.

The founders have continued in Kevin’s memory with the aim of creating awareness about children undergoing chemotherapy and related issues like hair loss, illness, and missing school. From 1995 to 2010, the fundraiser has grown from just a few participating schools to schools across the country. The funds raised are used to make young cancer patients’ daily lives more comfortable as they deal with this disease. When children participate in Hats On Day they make life happier for children with cancer and show compassion for the many difficulties young cancer patients face.

Hats On Day has grown to be one of the most influential and profitable fundraisers among school-age children, raising over $1 million during the past 10 years. Every year, 12,400 children and teens are newly diagnosed with cancer and one in four die.

Students at Auburn School who participated in Hats On Day can take pride in knowing they did something positive to help change these startling statistics.

Auburn Principal Melinda Crook presents Daylon Deary with a sticker as part of the Hats On Day promotion.

Garrett Goff broke out what he called his “army hat.”