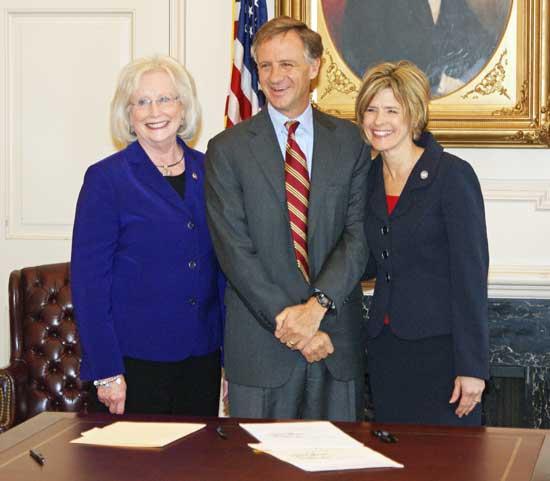 Pictured in the Governor's office is Senator Mae Beavers, Governor Bill Haslam and Rep. Terri Lynn Weaver upon the signing of the Tennessee Health Care Freedom Act on Friday.
Governor Bill Haslam on Friday signed legislation approved by the General Assembly to allow Tennessee patients to make their own health care choices regardless of the federal action taken in Washington last year.

Senate Bill 79, sponsored by Senator Mae Beavers (R-Mt. Juliet) and Representative Terri Lynn Weaver (R-Lancaster), does not seek to “nullify” any federal law, as it would allow individuals the option to participate in a federal program.

However, it acknowledges the right of Tennesseans to refuse to participate in a government-run health insurance program.

The legislation, called the Tennessee Health Care Freedom Act, seeks to protect a citizen’s right to participate, or not participate, in any healthcare system in Tennessee, and would prohibit the federal government from imposing fines or penalties on that person’s decision.

Print
Members Opinions:
chipcook
[Delete]
That's great news. We may finally have some true courageous folks in office who have a sense of responsibility. The Federal Courts have ruled that it is un-constitutional to require a citizen of the United States of America to purchase something based on a Federal mandate.