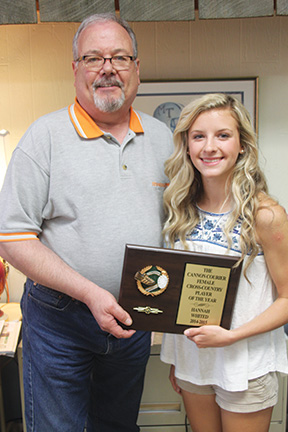 DAVID HUNTER
The Cannon Courier
Most of the attention this school year on the CCHS athletic field belonged to a well-rounded, very talented senior class, including the McReynolds, Josh Ruehlen and Kristen Hale. However, it was a younger teammate, Hannah Whited, who made history this year in cross-country and track, including winning a state championship.

"Last year, I learned from my mistake, because I took more time off," CCHS sophomore Hannah Whited said. "This year I went straight from cross-country to track, and I felt like that helped me a lot, because my body stayed in shape more.

The sophomore continued her success on the paths and track this season even though she had to do it for two different schools. Last season, Whited qualified for the cross-country state meet as a freshman, but she was the only member of the Lionettes to achieve this feat.
This season, her success continued as she was the top finisher for CCHS at all of the cross-country meets, which included two overall wins. At the same time, Whited was a member of the Lionettes which made history as the first team in school history to advance to the state meet as a team. During the state meet, Whited finished 11th, and the Lionettes as a whole completed the season with a 6th place placing overall.

"(Hannah) Whited is a very tough blue-collar runner," CCHS Cross-Country head coach Marc Larson said. "She always shows up and gets the job done. I never had to worry about her performance. Her consistency was due to her work ethic. Her attitude matches her ability. She is extremely supportive of the other runners. With all of her success, she stays grounded and loved by everyone on the team."

Her success continued in long distance races, but she had to compete with a different school since CCHS does not have a track team. A couple of weeks ago during the Spring Fling at MTSU, Whited helped win a state title as a member of the Murfreesboro Central Magnet track team. She was a member of the 4x800 relay Class A-AA state championship team and she also finished fifth in the Class A-AA 1600 meter race also running for MCMS.

"It was really exciting and nerve-racking because we wanted it really badly," Whited said. "It was a good environment for racing. We were ready to go."
One of the best parts about winning a state title here in Tennessee is getting the chance to stand on top of the podium and receive your medal. It was a special moment for Whited a couple of weeks ago.

"It was a great feeling because we had worked so hard all season for that," Whited said. "From the beginning our coach wanted us to win state and it was a really good feeling that all of hard work had paid off."

Getting ready for distance race is a long process, which includes a lot of speed training during the week preparing for the upcoming meet. The training also includes tempo runs getting her ready running at different paces.

Her love of running started at a young age when she would train with her mom. Her competitive career began in the eighth grade when she ran for Auburntown.
"I like it because with every other sport you have to be good at something like shooting the ball a certain way or hitting the ball a certain way. With running, you just use your own body."
As for her future goals, Whited would like to compete for more state championships while keeping her grades up in the classroom, and she hopes to have colleges start to take notice of her abilities.