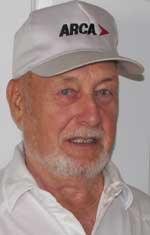 In the movies, such as Thunder Road starring Robert Mitchum, we saw the fast driving and daring it took to drive a car loaded with 120 proof alcohol. This was not the gasohol that we have now. It was drinking alcohol and it was made with corn mash.

In the history of National Association for Stock Car Auto Racing (NASCAR) many of the early drivers will tell you that they started racing after the pressure got too hot to handle from the revenuers when they were running illegal liquor or moonshine as we know it. A documentary of NASCAR told the story of the boys from North Carolina that ran moonshine for a living and then went straight into stock car racing. This also led to friendly competition of drivers which brought forth the birth of NASCAR by founder Bill France.

Automobile Racing Club of America (ARCA) was founded in 1953 by John Marcum and was a stepping stone for many of the early pro-racers, former drivers like Benny Parsons, Kyle Petty and Ken Schrader and others have competed in and advanced through the ARCA series on the way to successful NASCAR careers. ARCA is still often used as a stepping stone for hopeful NASCAR drivers.

After he confirmed to me that he wasn't into running moonshine before he got into racing, I agreed to tell about Hank Lloyd's induction into the ARCA Racing Hall of Fame.

Henry C. "Hank" Lloyd was born in Toledo Ohio on February 28, 1934. I knew Hank as being a law enforcement officer, working as a deputy under Sheriff Robert Bogle and then as MTSU Police Officer in which he retired. But evidently in his home state of Ohio he was something different.

While in Ohio, he had his own businesses, such as trucking and then a garage. He also worked six years with the Lucas County Sheriff's department. But his heart was elsewhere. In the 1950's Hank went into stock car racing. He was a member of the Automobile Racing Club of America (ARCA) and was sponsored, not by his own business, but that of an investor.

Hank drove Fords and ran 427 engines, he raced oval tracks, some quarter mile track and some quarter mile tracks like Flat Rock Michigan and Illinois, and Hielsburg Pennsylvania. His track record was impressive, impressive enough to always be invited to all the invitational's around the circuit. He told me that he had a pit crew of 4 men. And a couple of quick change rear ends for the different tracks he competed on.

It is an expensive hobby to say the least, but Hank was helped along with the expense by testing the Holley Brand Carburetors. I have read and had been told on numerous occasions that a car maker can learn more about a product in one year of racing than they can in ten years of testing. Hank said that he could tell them right off if a carburetor was either too much for an engine or not enough. His particular pick for his 427's was the 1150 Dual Line Holley. He said it was the perfect match for his engines.

On July 14th and 15th in Toledo, Hank along with 14 other drivers were inducting into the Racing Hall of Fame. Hank had won a race in Wayne, Michigan and always came in the top positions. Hank said he remembered almost all of the drivers in his era of racing. Some of the men that were awarded the privilege of being inducted into the Hall of Fame received it posthumously. After the induction at the Toledo track Hank was with the likes of Kyle Bush while signing autographs.

Hank tells me that the last race he was ever in was at Daytona Speedway, ARCA was there at the request of Bill France hoping to instill in all racers the importance of institutions like ARCA. Hank had just passed 10 vehicles and hit 187 miles an hour when his engine blew. He retired from racing after that having been in the cockpit for 19 years. A couple of years later in 1974 he moved his family to Cannon County.

Just recently, his wife, Grace Gilley Lloyd died after a long illness. Hank was her care giver for so many years. He still has the craving for cars and he keeps himself busy down at Vance Auto Sales at the corner of West Water Street and Main. Go by and visit him and he will tell you firsthand what it is like leading the pack in stock car racing.