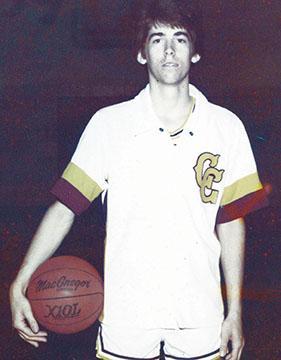 When Alan Bush got tired of losing, the landscape of boys basketball changed at Cannon County.

Bush enjoyed a stellar prep career at Cannon County that culminated with him signing a basketball scholarship to play at Roane State. He would later return and coach the boys basketball program at his alma mater - realizing consistent success during a nine-year run that stands as one of the most successful in program history from 1993-2002.

Bush is one of the six individuals who will be inducted into the Cannon Courier Sports Hall of Fame at the Arts Center of Cannon County, May 15, at 6:30 p.m.

Bush's best season as a standout player at Cannon County was his senior campaign in 1984-85 when the Lions reached the TSSAA Boys State Tournament for the first time in school history. It is still the only boys team to play in the state tournament to date.

Bush, the son of Helon and Maurice Bush, capped his career earning All-District, All-District Tournament, All-Region and All Midstate recognition.

"Playing in that state tournament was an awesome experience," Bush said. "I think back and it was a neat time. We actually thought we were going to be real good our junior year but that didn't work out. We continued to learn and grow and did much better in our senior year."

Winning had not always been part of the boys basketball vocabulary at Cannon County. Mounting frustration seemed to finally get to Bush in a game during his junior year.

"I remember getting mad on the floor and committing a hard foul," Bush said. "Coach (Terry) Gannon pulled me over and asked what was wrong. I told him I was just tired of losing. I don't know, maybe that's when it clicked for me."

Bush was a vital player in the team's success. He was a do-it-all guard with a passion for the game.

"Alan had a natural feel for the game that you can't teach," Coach Gannon said. "Besides being talented he had that natural feel for it and understanding of it and that made him a special player. Alan did all of the things well. He was a very good passer, very good ball handler, good shooter, he could rebound, play defense. He could just do it all. That probably shows up by being inducted into the Hall of Fame."

"Alan was a good leader," said Gaylon Sissom, who played three years with Bush. "He was always kind of the leader of the bunch. He played hard. His junior year he was probably our best scorer. He did most everything for us. He could run the 1, 2 or even get in the 3 spot. He was pretty versatile. I always thought, to me, Bush was always the best all-around player. You could just see it. He worked hard and honed his skills. He could handle the ball, shoot outside, go to the rack. Alan was always in basketball doing something."

So it should come as no surprise that Bush would end up becoming a coach.

He became Cannon County's head boys basketball coach in 1993-94 and took over a program that had suffered through lean years. In fact, Cannon County had not finished higher than fourth in the district since Bush graduated in 1985 - and that happened just twice.

Within four years Bush had Cannon County's program on the upswing.

"Coach Bush ran a tight ship but he made you better," said Ryan Tenpenny, who was a senior when the Lions won the district championship in 1998 - their first district championship since 1976-77. "You didn't cheat on anything and there were no shortcuts. You played basketball by the rules, you played hard and with respect for the game.

"Coach Bush had a lot of pride in winning and winning right. I liked playing for someone who had that passion. I didn't know if I could ever do enough to satisfy him, but he made it where you really wanted to try to give the effort to satisfy him."

Once Cannon County turned the corner in 1997-98, winning the district and reaching the region semifinals, it never looked back.

"When I started I felt like I had a lot to learn," Bush said. "I did feel like we were making progress and getting somewhere with the program. You have to have good players to have success and we had a bunch of them."

Bush led the Lions to the regular-season district title in 1998-99 and advanced to the TSSAA Sectionals twice in a four-year span. His teams reached the region tournament five straight years.

Current Lions head coach Matt Rigsby was a senior in 1999-00 when the Lions reached the Sectionals for the second straight year under Bush.

"Coach Bush taught me the game," Rigsby said. "He demanded that we do the little things correctly. To this day, coaching-wise that is what I took from him more than anything. There was never an opponent we were playing that we were not prepared for. His scouting reports were so detailed that we felt we knew the other opponent well."

Bush, who currently is the head girls basketball coach at Siegel High School in Murfreesboro, said his players worked hard and had a desire to succeed.

"The kids I had were good kids who worked hard," Bush said. "They knew how to work. Some of them hauled on hay on the weekend or did things like that. They were raised right. I had good groups of kids all the way through. Sure there were problems here and there but I have no complaints or regrets looking back."

A simple philosophy is at the foundation of Bush's success.

"At the end of the day I want my players to play hard, have fun and have a positive experience from playing basketball," Bush said. "The wins and losses take care of themselves. If you do things right the wins will come."