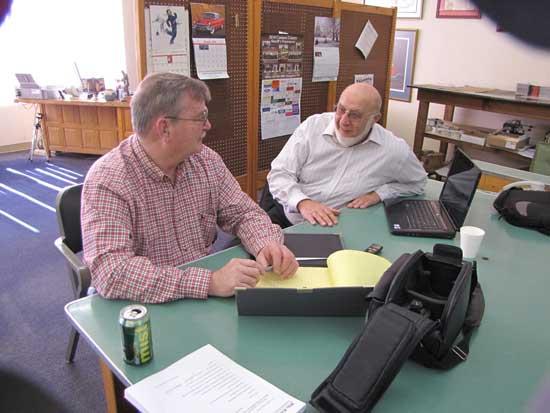 Gerald Molitor of Light Life Evangelical Ministries, right, discussed the devastation caused by the earthquake in Haiti with Courier report Bob Stoetzel Monday.
The earthquake that took place last week in the poorest country in the Western Hemisphere, Haiti, had repercussions here in Cannon County. There are a lot of churches from around the United States that have a presence in the Caribbean County. Missionary workers have always been in Haiti to give help to those people, either spiritually, teaching or financially.

Members of the Cannon Community Church had a group of missionaries down in Haiti when the quake happened. Gerald Molitor, who is a member of the “Light Life Evangelical Ministries”, led a group down to Haiti. In the group were Gerald, his son Chad and his grandson Parker Molitor, Mike Mitchell, Mike’s brother-in-law Kevin Schreiber of Indiana, Gerald Rollins and his son Riley Rollins from Murfreesboro were also in the group.

In the beginning, after the quake occurred last Tuesday (Jan. 12) I was unable to reach anyone from the church or the family to gather the facts of what is going on down there. However, I talked to Chief of Police Tony Burnett who advised me that they had heard from the group and everyone is fine. It was unclear at that time when they would be brought back to Tennessee because the country’s infrastructure was in chaos. No phone lines, limited plane travel. The United States is bringing in fresh water and food subsidies, and is sending in about 6000 troops and promising $100,000,000 in aid for the country. The earthquake came on the heels of a devastating hurricane season which brought four hurricanes that turned the Caribbean Nation upside down during this past summer.

U.S. forces secured the airport in the capital and began an airlift of urgently needed medicine, water and other essentials.  “As many as 5,500 U.S. infantry soldiers and Marines will be on the ground or on ships offshore this week”, a Defense Department official said. More than a half dozen ships were heading there Thursday or preparing to get under way, said spokesman Bryan Whitman. They included the aircraft carrier USS Carl Vinson, to arrive Friday, and a hospital ship with 12 operating rooms, the USNS Comfort, expected by Jan. 22.

President Obama said the $100 million the government is initialing directing toward the relief effort would certainly grow over the year as the recovery turns from emergency to rebuilding the already deeply impoverished nation. The American Red Cross has already sent $1,000,000.00 in aid and is coordinating donations to the rescue operations.

Pastor Eric Hinson of the Cannon Community Church told the Courier Thursday evening that its members were on a plane headed to Florida from Haiti. It seems that the missionaries were 130 miles away at the time of the quake.

Amy Molitor Davis, from the Old Feed Store, just came back from Haiti not too long ago. She and her husband adopted an eight-year-old boy, whom they named Jon Micah. After the quake Amy says that her son has asked about his birth mother, who lived in the Capitol City of Port Au Prince, Haiti which was the epicenter of the quake. She said so far there was no word on her.

Amy tells the Courier that her mother and father-in-law are missionaries in Cap Haitien, Haiti which is just 80 miles from the Capitol City. Don and Karen Davis have been missionaries for the last 26 years there. She reports that the quake and its aftershocks were felt there at their home. But Amy says that the roads in Haiti are in very rough and poor condition. And you could hardly feel the tremors when you were driving.

Friday, the 15th, Gerald Molitor and his group came back to Woodbury after driving all night from Fort Pierce, Florida, which is where the Christian Missionary Flights is berthed. I waited for them to get a day’s rest before I interviewed them.

Gerald and I met at the Cannon Courier office on Monday morning to discuss the ordeal that they had just left. Gerald said they usually stay a week at a time in the country and that the Mission backed church that they attend to in Bas Fosse (pronounced according to Gerald as By—Fo-say). It is a community of about 1800 citizens.

The road to the town is dirt or mud and is very hard to navigate. Gerald said the first thing they did when they got off the airplane was to rent a Toyota Van, he said they were going down the rough road when a door from the van fell off. After some time they were able to replace it. Also they had to purchase a battery for the vehicle. Gerald says that they had left a jeep down in Haiti and they brought with them on the flight 5 new tires. And they had to change a blown tire while they were using the jeep. He says that the only vehicle the townspeople ever see is when the different Missionaries came to their village. Each missionary also pays $800 each to be able to go to Haiti, which includes the plane ticket.

The Missionaries use their know-how on trying to repair or dig new wells for the villages; Gerald says that you can never tell what is in the well water. There really are no sanitized facilities to make the water good for them, especially the Americans. Gerald says “you don’t want to get sick down there, for there is no help” he also says that whatever you need you had better bring it with you. There is no electricity available to this village, and the electricity that Haiti does have is over taxed and is all but useless.

Shortly after they first got there, the church was having a baptism. As they were marching towards the river the roads flooded and it became impassable, so the pastor decided to have the baptism in the middle if the road. Gerald had brought his computer with him to see me at the Courier and showed me how deep the water was and the crowd of people that were attending the baptism. The pictures show one man with his bicycle over his head while he crosses the ribcage high water.

Gerald says he has been going to Haiti for three years and has found what the churches have been fighting to win the people over to Christ is Voo-Doo. The Haitian people were originally from Africa and the custom came with them some 300 years ago. It is awfully hard to fight something that has held a grip on people through tradition for so long. He showed me a video of a woman who had said that she had wanted to be baptized, but she knew she was possessed with a demon. When she entered the baptistery pool and the pastor dipped her in the water she came up screaming and fought all that were around. The pastor held on to her while the whole congregation came close and prayed for her. She kept struggling for a long while and then she stopped and started reciting the 23rd Psalm. She is now one of the faithful to Christ.

Gerald said that one of his partners down there, Mr. Gerald Rollins was a successful business man and that he was so touched by the faithfulness and the lack of materials to help make this church self sufficient that he would purchase equipment in country to help the mission church. The only way that the pastor can get anywhere is to walk. Everything needed is a long way off. Rollins saw that the roads were even hard to negotiate by 4 wheeled vehicles. So he went to Cap Hatien and purchased three motor scooters for the church. At over $4.50 a gallon for gasoline the scooters would be the most cost effective way to travel. Gerald says that the cost of a gallon of gas is sure to go out of this world because of the earthquake, as everyone receives their gas from Port au Prince. And that because of the devastation the people who find themselves homeless are now going to head to Cap Haitien which is already a city with a population of hundreds of thousands people.

Forty percent of the domestic product of Haiti comes from the Haitians who have left their country to go elsewhere, they work in different countries and then they send money home to their family. The pay for the average laborer in Haiti is approximately $300.00 dollars a year as compared to Mexico which is $1,100.00 a year.

Despite all of the hardships of the people, Gerald says that they are a happy people always singing and always friendly. They know that the missionaries are friends and they will go out of their way to make sure the missionaries are treated with kindness and respect. There are masses around the world who are helped by people wanting to bring Christ into the lives of the poor and uneducated. Gerald dedicates his personal ministry to helping the Haitians and encourages others to think about being a messenger from God to bring his word to the masses.

There are many organizations that are collecting money to send to Haiti for relief, such as the Red Cross. But also when there is a disaster there are people who want to profit from that disaster illegally. Gerald says that every penny that his organization collects goes to Haiti. His ministry is called Light Life Evangelical Ministries.