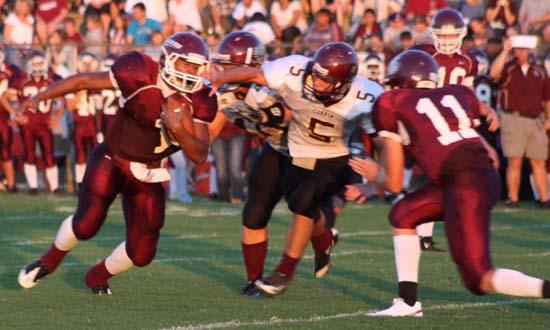 Linebacker Damon Collette, 5, fights off a block in pursuit of Spring HIll back Greg Crawford. Collette had two sacks.
COLUMBIA - If history repeats then Cannon County's football team will be back in the TSSAA State Football Playoffs in the fall.

The Lions opened the season with a tough 43-6 setback at Spring Hill Friday night and, like in 2009 when they lost to Spring Hill 42-14 in the opener, hope to prove it's not how you start that matters.

"We have a lot of work to do and our focus is to move on and continue to work and that's what we will do," Cannon County Head Coach Joel Schrenk said. "We are young at many positions and even some of our older guys are inexperienced so you will have some growing pains. I'm proud of our team because they never gave up out there. They just kept fighting through."

The Lions were playing without projected starting quarterback Brandon James, who suffered an injury last week and was unavailable for action against Spring Hill. He had earned the starting quarterback job coming out of spring drills and maintained it through the fall, though James also was getting reps at receiver and tailback spots, as well. He also was a starting outside linebacker.

In his absence, senior Heath Simons started at quarterback for the first time in his career. He passed for 82 yards and had seven completions. He threw one interception but Simons also hauled in one from his free safety position.

"For his first game ever at quarterback I thought Heath was as solid as he could be," Schrenk said. "He did a fine job back there. We do game plan differently with Brandon than Heath but I don't know that had anything to do with this game. We'll see what the doctor says about Brandon's injury this week and go from there."

Senior tailback Gabe Walkup bullied his way in from the 2 with five seconds remaining to account for the Lions' only score. He led Cannon County's offense with 74 yards on 16 carries and also hauled in a 15-yard pass. Walkup also was among the team leaders in tackles from his linebacker position.

"Spring Hill is a good football team but I don't think the score should have been 43-6," Walkup said. "We are a better team than we showed in this game. We were playing good early and staying with them but it got away in the second quarter. We will keep working and get better. The effort was there."

Effort was not enough to slow Spring Hill's offensive attack. The Raiders piled up 333 yards total offense, gaining 272 on the ground. Greg Crawford led the way with three touchdowns, including a 78-yard rushing burst in the second quarter and a 56-yard punt return. He added a 3-yard run and finished the game with 110 yards on just six carries for an 18.3-yard gain per carry. Ray Koderis also reached the century mark, rushing for 100 yards on just seven carries. He scored on runs of 8 and 38 yards, respectively.

"Our reads were good. We were in position most of the time," Walkup said. "We just missed too many tackles. We didn't wrap up. We didn't finish plays. We work on those things but I guess we have to work on it even harder. There were just too many missed tackles."

"We did some good things tonight," Collette said. "It's not really the way we wanted to start the season but there were some positives and we need to focus on those and learn from the mistakes. We had some good things happen and we can build on that."

The most glaring difference in the game was Spring Hill's ability to successfully wear down out-manned Cannon County with an array of talented backs. The ploy eventually worked.

Cannon County was in the game midway into the second quarter, trailing 7-0, and had the ball inside Spring Hill territory on three of its first four possessions only to come up empty each time. The toughest blow came at the end of the first quarter and capped what had been a masterful drive.

"When we were fresh we did some good things," Schrenk said. "If we score on the first long drive in the first quarter or one of those first two possessions of the second quarter it would have been a different game. I'm not saying we would have won but it would have been a different game. Our challenge in the second half was to play with guts and keep our heads up. The kids put forth tremendous effort tonight and we can build off of that."

Jordan Linder had two catches to tie Collette for the game-high in receptions. The Lions face West Creek in their home opener Friday at 7 p.m.