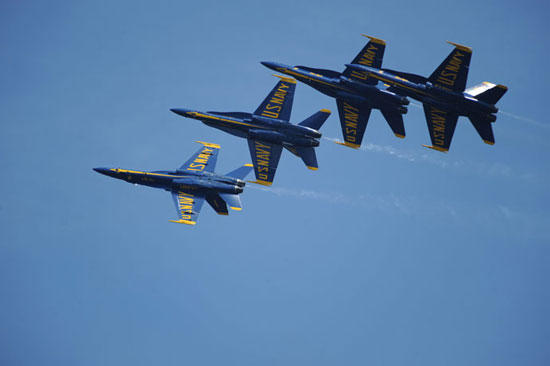 NASHVILLE - April 23, 2012 - The United States Navy Blue Angels precision flight demonstration team soars into Middle Tennessee for the 2012 Great Tennessee Air Show on Saturday, May 12 and Sunday, May 13. Presented by the Smyrna/Rutherford County Airport Authority, this year's show also features many other exciting aerobatic acts, military and civilian aircraft on display, and a Kid Zone.

The 2012 Great Tennessee Air Show will also include performances by renowned pilot Corkey Fornof, the iconic stunt pilot who has more than 17,000 hours of flight time in nearly 300 different aircraft and has appeared in several Hollywood movies and the grace and magic of power-less flight by paraplegic Dan Buchanan in his TK-17 Hang-glider.

The war-bird enthusiasts will particularly enjoy the show when Scott "Scooter" Yoak in his P-51 Mustang and Dave Folk in his F4U Corsair take to the skies. Veteran announcer Danny Clisham will return to give his uniquely styled play-by-play. New this season will be appearances by the U.S. Navy Seals' Parachute team, the Leapfrogs. For more information on each performer, please visit the Great Tennessee Air Show website.

"The Great Tennessee Air Show is a fantastic opportunity for Tennesseans to get up close and personal with aviation," said John Black, Executive Director of the Smyrna Airport. "We strive to produce one of the most entertaining air shows in the country and to inspire our youth, our next generation of pilots."

Ticketing is available online throughout the entire weekend at www.greattennesseeairshow.com. Advance general admission for children ages 4-12 is $8, gate admission is $10, and children under age 4 are FREE. Adult tickets (ages 12 & older) are $20 in advance and $25 at the gate the day of the show. Premium Box Seating and Flight Line Club tickets are also available.

Advance prices are available through Friday, May 11. Gates open at 8am daily with flying beginning at approximately 11:30am daily; free parking is available. Visitors are encouraged to arrive early to ensure the best seating and enjoy the static displays and numerous concession options.

This year's air show coincides with Nashville Navy Week (May 7-13). The goal of every Navy Week is to give area residents an opportunity to meet some of the Navy's Sailors and learn about the Navy's critical missions and its broad ranging capabilities. For more information, please visit navyweek.org.

Please note: All acts are subject to change/cancellation without notice. Also, Sam Ridley Parkway approaching the Smyrna Airport will be closed to traffic from 3 to 5PM on both Saturday, May 12 and Sunday, May 13.