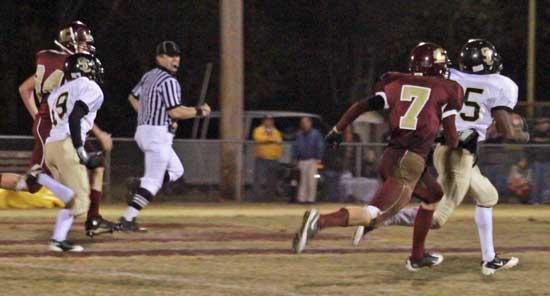 Colin Jones (7) tries to chase down a Smith County runner Friday night. (CANDICE JONES photo)
Eight Cannon County senior football players were recognized for their contributions to the program during a pregame ceremony in the home finale against Smith County Friday night.

Following the game the Great 8 walked off of Schwartz Field on the wrong end of a 48-6 loss to Smith County but they did so holding their heads high and realizing the finality that faces them in the not too distant future.

"The season goes much faster than you think it should," senior tailback Gabe Walkup said. "When you start high school you think four years is a long time but it goes fast and then when you are having Senior Night you realize this is it. It's almost over and you better appreciate the opportunity and give it all you got."

"They have been a good group and I've enjoyed my two years with them," Cannon County Head Coach Joel Schrenk said. "They have always given everything they have and that type of leadership is something positive they have passed along to these younger players."

Walkup continued the consistent running style he has demonstrated throughout the season, rushing for 82 yards and scoring the Lions only touchdown on a 28-yard run in the fourth quarter. Walkup shook off three would-be tacklers on his way to paydirt. He needs less than 100 yards to reach the 1,000-yard rushing mark for the season.

Simons completed seven aerial attempts for one of his better outings and Jones and Steelman each hauled in passes. Jones had two receptions on Cannon County's scoring drive. His 19-yard reception on a second-down call moved the Lions into Smith County territory.

Those senior linemen - Melton, Northcutt, O'neel, well they have helped pave the way for Walkup to near a milestone rushing mark, and King was in on several tackles on the defensive line.

Smith County scored on all six of its first-half possessions to build a 42-0 halftime lead. The Owls scored on three consecutive plays during one stretch.

The Lions will be off Friday.

Print
Members Opinions:
mkjomurf
[Delete]
"They have always given everything they have and that type of leadership is something positive they have passed along to these younger players."

coach maybe you should tey this once or twice it might work for you.