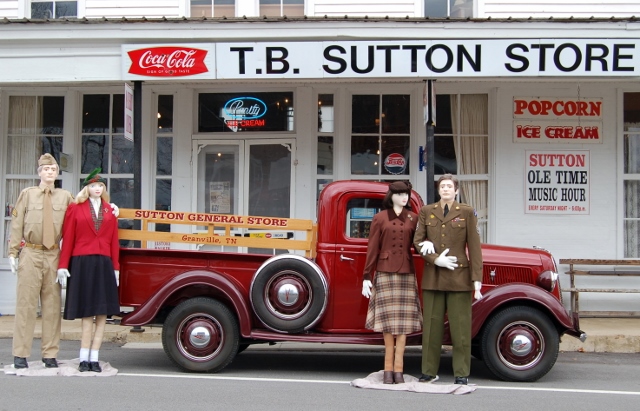 Historic Granville announced today that their 2017 theme will be " 1940's: A Decade of Change- Thanks for the Memories". The 1940's will be a year long celebration which will begin when the 2017 season opens on March 9th. Pictured in front of Sutton General Store is some of the 2017 scarecrows created by Granville resident Cynthia Mathews which represent soldiers that were in Granville during World War II Maneuvers as well as wives and girl friends that came to visit them while they were stationed in Granville. The 1880 Sutton Home will feature guided tours of "Maneuvers: They Came as Strangers and Left as Friends", Antique Car Museum will feature 1940's automobiles and military Vehicles, Granville Museum will feature Memories of the 1940's and
the town will be decorated in the 1940 era. The Granville Museum will be hosting the Tennessee State Museum Traveling Exhibit " The Slaves & Slave Holders of Wessyngton Plantation" which will be on exhibit from March 9th till June 6th.

The official Grand Opening of the 1940's Celebration will be on April 8th with the 1940's coming to life in a grand fashion as two World War II Musicals entitled " I'll Be Seeing You" performed by the Freedom Belles as well as two World War II Re-enactments will be occurring. April 8th will also feature the 5th Granville Genealogy Festival with a full Day of wonderful speakers, booths and genealogy information. The celebration will also feature a Antique Car Show which will be for automobiles up to 1950's with a parade At 3:00 p.m. The second annual Upper Cumberland Wine Festival sponsored by The Upper Cumberland Wine Trail will be held from 12:00 to 5:00 p.m. in the Pioneer Village which has been great expanded from last year. Museum will be featured all day by Lynn Beal Jazz Band at the Pruett Stage as well as craftsmen of yesteryear. April 8th will also mark the 9th Anniversary Celebration of the Sutton General Store and Sutton Ole Time Music Hour. John Tomlin & Company performing at the Anniversary Ole Time Music Bluegrass Dinner Show.

Historic Granville is operated by 180 dedicated volunteers who give of their time to preserve the historic town of yesteryear. New volunteers are needed for the 2017 season. For more information call 931-653-4151 or granvilletn.com.