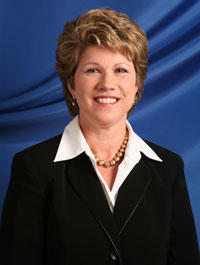 Kim McMillan, a Democratic from Clarksville who is vying to become Tennessee's next governor, will visit Woodbury next Friday for a campaign stop.

McMillian will be at a "meet and greet" hosted by J.P.'s Fine Swine BBQ on North Tatum St. beginning at 1:30 p.m. Friday. She plans to tour the courthouse and other locations in the downtown area afterward.

McMillian will be the fourth gubernatorial candidate to visit Woodbury in the last few months, following preview stops by Zack Wamp, Bill Haslam and Mike McWherter.

The first woman in Tennessee history elected Majority Leader of the State House of Representatives; Kim McMillan brings a lifetime of achievement to public service. The adopted daughter of teachers, she was valedictorian of Knoxville’s South-Young High School, and an honors graduate from the University of Tennessee and the UT College of Law, where she was the Executive Editor of The Tennessee Law Review.

In 2006, Kim did not seek re-election to the Tennessee House of Representatives and accepted an appointment by Governor Bredesen to his Cabinet, where she served as Senior Advisor to the Governor. In 2008, Kim returned to her hometown of Clarksville to serve as Executive Director of Community and Business Relations for Austin Peay State University. Kim is currently a faculty member at Austin Peay, teaching in the Political Science Department.

Kim is a founding board member of Leadership Middle Tennessee and is the chairman of Cumberland Bank & Trust, a community bank in Clarksville. She also serves on the board of the Monroe Carell, Jr. Children's Hospital at Vanderbilt. She practiced law with Boult, Cummings, Conners & Berry, PLC in Nashville, Cunningham, Mitchell, Hicks & McMillan, in Clarksville, and with her husband in the Clarksville firm they founded, McMillan & McMillan.

Kim and her husband Larry, a native Clarksvillian, have been married for over 20 years. They have two children who attend the public schools in Clarksville, Katie 17, a high school fast-pitch softball player and Ryan 16, a high school golfer.