Gordon Decides To Not Seek Re-election In 2010 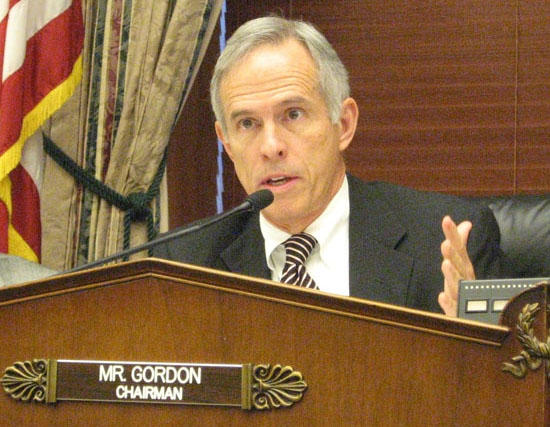 MURFREESBORO - After more than a quarter-century of public service to his home state of Tennessee, U.S. Rep. Bart Gordon announced his plans to retire from Congress when his current term ends in 2010.

“I feel honored that the people of Middle Tennessee have allowed me to serve them for the past 25 years,” said Gordon. “Every decision I have made in Congress has been with their best interests in mind. I hope the people here at home feel that I have served them as well as their good advice and views have served me.

“When I was elected, I was the youngest member of the Tennessee congressional delegation; now, I’m one of the oldest. In fact, I have members of my staff who weren’t even born when I took office. That tells me it’s time for a new chapter.”

Gordon, the dean of the state’s congressional delegation, said he made his decision after consulting with his wife, Leslie.

“Turning 60 has led me to re-evaluate what’s next. I have an 8-year-old daughter and a wonderful wife who has a very demanding job. I am the only child of my 83-year-old mother, Margaret. They have made sacrifices to allow me to do what I love by serving in Congress, and now it’s my turn,” said Gordon.

Strengthening families has been a common thread throughout Gordon’s time in Congress. During his service, he has consistently worked to improve the quality of life for working families by providing greater access to higher education; allowing workers to keep their jobs while managing a family emergency such as a sick child, spouse or parent; and working to preserve the American dream by ensuring today’s students have the strong math and science skills they will need for the jobs of the future.

His constituents have repeatedly recognized Gordon’s efforts by sending him back to the U.S. Capitol to represent them - in 13 elections, Gordon has never lost any of the 15 counties in his district. In recent years, he has won re-election handily, earning 64 percent of the vote in 2004, 67 percent in 2006, and 74 percent in 2008.

The son of a farmer and schoolteacher, Gordon was named chairman of the House Science and Technology Committee in 2007, becoming Tennessee’s first full committee chairman in 30 years. The congressman said he is grateful for the opportunity it presented to author landmark legislation such as the America COMPETES Act, but his goals in Congress have always remained the same.

“My dream for kids growing up in Middle Tennessee is the same that I have for my daughter, Peyton – for them to grow up in a safe neighborhood, get a quality education, and be able to find a good job close to home,” said Gordon. “I hope I’ve been able to make that dream more of a reality for the next generation.”

While Gordon’s congressional efforts may be coming to an end in a year, his legislative efforts and first-rate constituent service will continue in the meantime.

“I will be focusing on the work to be done in the year ahead. Our country is facing extraordinary challenges, and I will continue to work to be the best congressman I can be. My doors are open in Murfreesboro, Gallatin and Cookeville, and my staff and I will continue to listen to people’s concerns and help them cut through government red tape. Staying in touch with the people I represent has been my number one priority. That will remain true throughout my last year in Congress,” said Gordon, who has held more than 2,000 open meetings, call-ins and listening sessions during his service.

The congressman said his achievements wouldn’t have been possible without the support of many people very close to him, including his parents.

“I couldn’t have asked for more supportive and inspiring parents. My mother and my late father always stood by my side throughout the years,” said Gordon. “I’ve also been blessed with a talented, hard-working staff that has helped me do a better job. And I will be forever grateful to the friends and volunteers who have given their counsel and support over the years.”

Educated in Rutherford County public schools, Gordon graduated with honors from Middle Tennessee State University in 1971 and later received his law degree from the University of Tennessee. He served in the Army Reserves from 1971-1972. Gordon is married to Leslie Peyton Gordon, who is a partner with Korn/Ferry International, and they have one daughter.