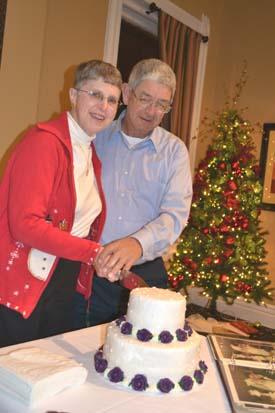 Charles and Janice Vance Ritchey cut their 40th anniversary cake during a surprise anniversary celebration held at "Goodness Gracious" Café in Murfreesboro on Friday, December 10th.
“Goodness gracious it’s good!” Friday evening December 10th Charles and Janice Ritchey celebrated their 40th wedding anniversary at the Goodness Gracious Cafe in Murfreesboro. The surprise party was given by their children Edwin Ritchey and Kelly Walker. “I was more than 100 percent surprised,” mused Charles to his friends. “I did not suspect anything until I saw the cameras flashing and heard our five grandchildren yelling, “Surprise!”’

Charles and Janice Ritchey married on December 19, 1970, at Auburn Baptist Church in Auburntown, TN. Janice had just completed a year of teaching at Auburn School and Charles was a Captain in the U.S. Army. “For a honeymoon, we toured Tennessee on the way to Fort Lee, Virginia,” Charles reported. “Yeah, and the Memphis Zoo was our first stop,” laughed Janice, “Because it was free!”

Charles retired from military service in 1986 and worked for the Nashville Postal Service until 2002. Janice retired from teaching at Centertown Elementary in 2006 where she was instructor of special education. The couple resides in the Greenhill Community of northern Warren County. They return to Auburntown frequently to visit Janice’s mother Kizzie Vance and teach Sunday school at Auburn Baptist Church.