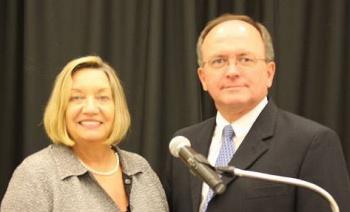 Phyllis Bennett, UCHRA Executive Director and TAHRA President, and Mike Gannon, Cannon County Executive and UCHRA Transportation Committee Chairman, recently attended the statewide annual TAHRA Conference in Gatlinburg.
COOKEVILLE – “Delivering Hope” was the theme of the Tennessee Association of Human Resource Agencies (TAHRA) Annual Conference recently held in Gatlinburg, Tennessee. Approximately 275 individuals including state legislators, state staff, county and city mayors and county executives, staff from the nine (9) Human Resource Agencies from across the state, and speakers from Tennessee and across the country convened to discuss the implementation of programs that improve the quality of life for all Tennesseans. TAHRA President Phyllis Bennett stated, “In fiscal year 2009, Human Resource Agencies have ‘Delivered Hope’ to more than 511,000 people across the State of Tennessee expending in excess of $192 million dollars.”

In President Bennett’s remarks at the opening session, she expressed appreciation to Governor Phil Bredesen and his staff, the members of the General Assembly and especially Lt. Governor Ron Ramsey who spoke to the conference attendees. Bruce Pearl, Men’s Basketball Coach for the University of Tennessee, delivered a motivational speech to the attendees; John Morgan, Deputy to the Governor, addressed the state’s economic situation and expectations for next year’s budget during the opening session.

Introduced by President Bennett, the luncheon keynote speaker gave a “Federal Update” addressing the programs administered by the State’s Human Resource Agencies. Bob Blancato, President of Matz, Blancato & Associates government affairs and advocacy services, Washington, D.C., made projections about the provision of services in relation to the federal budget during the upcoming program year. “Mr. Blancato provided informative information from the federal level that will have an impact on our communities,” stated Cannon County Executive Mike Gannon.

The conference workshops addressed topics of interest to the staff as well as the members of the Board of Directors of the Human Resource Agencies, such as home and community based services, the 2010 state budget, public employment law, expansion of existing services, etc. Organized roundtables provided an opportunity for sharing best practices in a number of program areas.

“The Legislative Roundtable general session led by J. William Pope, Jr., TAHRA Counsel to the Board and Government Relations, provides an opportunity to get information pertinent to our communities as well as allows the attendees to get answers to questions on issues that impact the people in our area. Cannon County’s State Representative Stratton Bone, along with three other members of the General Assembly, participated in the Roundtable discussion,” according to County Executive Gannon.

“The TAHRA Annual Conference allows the members of the Board of Directors and the staff of the Human Resource Agencies, state staff, and members of the Tennessee General Assembly to review the accomplishments of the past year, discuss the implementation of programs for the upcoming year, and obtain state and federal budget information that will impact the provision of services,” stated President Phyllis Bennett.