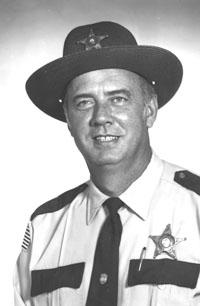 ROBERT SIMPSON
Funeral services will be held Friday at 2 p.m. at the Woodbury Church of Christ for former Cannon County Sheriff Robert Simpson, who died Tuesday at age 75.

His parents were the late Hillary Simpson and Eunice (Jones) Simpson. He was also preceded in death by two brothers, Sterling Simpson and Alva Simpson and by three sisters, Dorothy Collins, Ellen Brandon and Opal Sanders.

Simpson was first elected sheriff in 1964 and served two, two-year terms until 1968.

Simpson left office for the last time Sept. 1, 1994. He was the uncle of former Cannon County Sheriff Charley Brandon Jr.

"I first met Robert at the Colonial Shirt Factory in the early 1960s," current Cannon County Sheriff Billy Nichols said. "We were both working together and we became friends. He decided at that time that he wanted to run for Sheriff, he was in his late 20s or early 30s. People said he was too young and could not be elected. This was in 1964 and he won. He actually married my cousin.

"Robert was a man who always had a smile on his face and if you met him on the highway he would always wave and throw up his hand to you. He would go out of his way to help the elderly people and see to their needs. Robert was a big imposing figure of a man but had a warm and gentle heart.

"Robert could arrest you today and still be your friend tomorrow. People liked and respected him. He could do the job, if he came to arrest someone he could do it the easy way or the hard way, that was to up to you. If he came to get you, you left with him.

"In 2006 when I decided to run for Sheriff I went and talked with Robert and he gave me a lot of good advice. He was good politician and was a wealth of knowledge. I asked him often about his thoughts on politics and he was always correct in his answer. Through the years he advised hundreds of candidates.

"I will miss Robert a lot as will many, many  people. I want to extend my condolences to his wife Elizabeth, their daughter Virginia, his grandsons and the rest of the Simpson  family. They have deepest sympathy and
condolences in this time of sorrow.

Another former sheriff, Bob Stoetzel, said Simpson will be missed by people throughout the community who knew him.

"I was sorry to learn of the death of former Sheriff, Robert Simpson," Stoetzel said. "His passing will leave a hole in the law enforcement community in Cannon County. Robert held the office longer than any Sheriff in Cannon County. He had a unique ability to remember people's names and called them by their first name every time he met them and rarely used nick-names. This trait served him well in his tenure as a sheriff and working in the community. My family will miss him and wish his wife Elizabeth well."

Visitation will be held at Smith Funeral Home on Thursday, February 18, 2010 from 3-8 PM. Visitation on Friday, will be at the Woodbury Church of Christ from 11-2 PM. Funeral services will follow at the church at 2 PM. Herb Alsup and Doyle Sadler will officiate. Interment will be in Riverside Garden. Pallbearers will will Josh Owen, Jesse Owen, Jason Owen, Bobby Simpson, Billy Simpson and Jimmy Simpson.

Print
Members Opinions:
[Delete]
i'm old enough to remember robert simpson and he always did an exceptional job, sympathy to the family and all that knew him
sue
[Delete]
Our thoughts and prayers are with The simpson family... Robert was such a nice man and always knew everyone by name.. he will be missed by all but he leaves many fond memoroes and a legacy here in Cannon County. we love you Robert..may you be at peace now in heaven with Jesus!
terry, sue, alexis pelham family
[Delete]
Our prayers are with your family... Robert was always nice and kind. I know I have heard my parents, Grandparents, and Family talk about how great of a man he was... I remember going and visiting with him awhile back when he was at home... he loved company... my family would sit and talk with him for hours. Our sympathy is with the family and everyone that knew him.
[Delete]
Our thoughts are always with you,
your place no one can fill.
In life we loved you dearly,
In death we love you still.
You were such a great great-grandfather to Tessa. She thought you held the moon for her. Her favorite memories will have you in them Robert and wonderful Elizabeth too. My heart aches for our family but we hold you close within our hearts,
And there you will remain,
To walk with us throughout our lives
Until we meet again.
-Christina