From Machinery To Mules 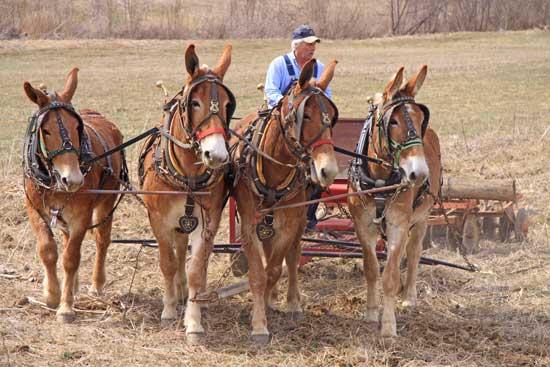 During the past few months it hasn't been unusual to see Terry Preston, of Preston Brothers Construction Company, digging up ground around the Cannon County Courthouse as his company works on the revitalization project of the Woodbury Town Square.

Sunday along John Bragg Highway, Preston was also turning dirt, but instead of using heavy machinery such as a bulldozer of backhoe, he was seen driving a team of mules pulling disking equipment.

Preston and other member of the Middle Tennessee Mule Skinners Association were working on a field east of the Arts Center of Cannon County.

A mule skinner is someone who drives mules. Land has to be disked first in order to prepare it for planting.

Bud Black of the Middle Tennessee Mule Skinners Association said the disking cuts up stalks in the field so they won't clog up a plow during the next stage of the planting process.

Most farmers today use a tractor to pull the equipment because it is much faster, he said, but added mules are just as effective.

"We've farmed all my life with mules," Black, who is in his 80s, said. "I've been working with them since I was five or six years old. We used them to plow our fields to plant crops and make money, and that's all the people who use tractors or doing.

"This is the same thing, it's just more fun."

Print
Members Opinions:
65stang
[Delete]
Good to see the Muleskinners at work keeping history and old traditions alive, keep up the good work.
GAP
[Delete]
I am glad to see he has time to play farmer but cannot get parking on the square for the poeple at the courthouse or the stores