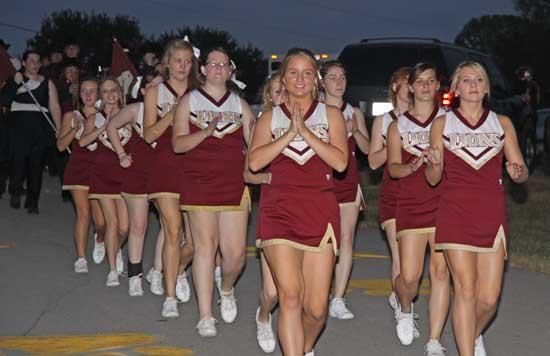 CCHS Cheerleaders lead the Lions into Fred Schwartz Stadium Friday night.
The youth movement is in effect within the Cannon County football program.

The one-sided score late precipitated some of the influx of youth on an already predominately young team; however, the injury bug prompted an even greater amount. The Lions (0-6) already were down four players prior to kickoff with Zach Osborne, Justin Tobin and LJ Lulow out due to injury and Brandon James serving a two-game suspension for disciplinary reasons, but things worsened during the game.

Junior tailback/linebacker Damon Collette suffered an ankle injury on a first-quarter kickoff return and did not return, and junior Jordan Linder, the team's leading receiver, was hit with a helmet in the lower back in the third quarter. He was taken off the field on a stretcher and transported to Stones River Medical Center for X-rays, as well as precautionary measures.

The dire situation created opportunities and many of the youngsters took advantage. Freshman B.J. Daniel made his first career start at linebacker and performed well. Sophomore Ethan Bryson started at defensive tackle and played the whole game. Freshman Waylon Sedtal completed the game at tight end following Linder's injury and helped pave the way for the team's only scoring drive. Freshman Hawk Love was impressive in his most extensive time at running back, supplying 31 yards on four carries, and freshman Ryan Jordan debuted at quarterback in the fourth quarter.

"If there is a silver lining it is that we played a bunch of young ones tonight and they did some good things," Schrenk said. "We are going to start looking at some of the young guys and look to get them experience now so next year the sophomores are not sophomores. (Love, Bryson  and Daniel) are good examples of that tonight. They stepped in and did well and when they step in there next year they are going to be ready from the start."

Even though underclassmen gained more playing time against MTCS (3-3) veteran workhorse Gabe Walkup remained the bell cow. Walkup rushed for a season-high 169 yards, had three receptions for 31 yards, scored the team's only touchdown and added the 2-point conversion.

Walkup supplied Cannon County's only touchdown with a 15-yard reception from quarterback Heath Simons with 8:09 remaining. Walkup added the 2-point conversion on a run up the middle. It was only fitting Walkup cashed in because he was offense on the 11-play, 80-yard drive. Walkup carried the ball eight times and had nine touches. Love had the other two carries, slicing for 21 yards to move the Lions toward the end zone.

"It was a good drive and we did some things better on offense in the second half but it wasn't enough," Walkup said. "We never give up but this is a tough one. We just made too many mistakes."

Mistakes and a stifling Cougar defense, under the direction of coordinator Steve Williams, made the going tough for the Lions. MTCS scored two touchdowns on interception returns and a pair of fumble recoveries set up two more. The Cougars forced five turnovers and converted each into points while also scoring on a 42-yard punt return.

"We gave up too many big plays," Schrenk said. "We blow a coverage or do things that are not very smart and that's going to get you beat, but it is also part of being young."

MTCS jumped out to a 7-0 lead when quarterback Ivey Starling connected with Christian Kile for a 30-yard touchdown pass on a fourth-and-12 play from the Lions 30 with 7:27 remaining in the first quarter.

The game remained 7-0 into the second quarter before the Cougars extended the margin to 14-0 when Starling hooked up with Chris Beasley for a 45-yard scoring strike. MTCS stretched the lead to 28-0 by halftime and never looked back.

Any remaining hope of a potential comeback were dashed when MTCS scored on an interception return early in the third quarter and recovered a fumble to set up another touchdown on Cannon County next offensive possession.

The Lions return to district action when they travel to Livingston Academy Friday.