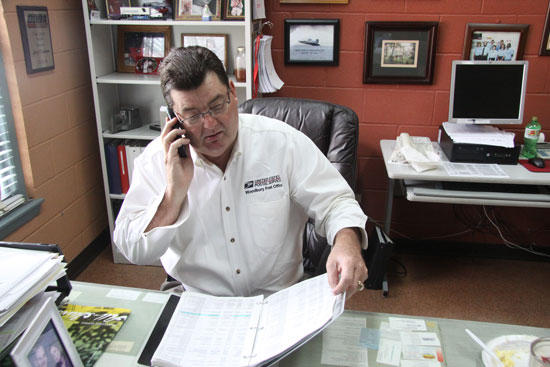 Jerry takes care of last minute details.
Jerry Freeman has been paid by the U.S. Postal Service for the job he has done for the past 40 years.

Freeman has been paid but he rarely feels as though he had to “work” during the four decades he has served the U.S. Postal Service. Freeman, always smiling and willing to help others along the way, will retire as Postmaster of the Woodbury Post Office, July 31.

“It doesn’t seem like it’s been 40 years,” Freeman said during a reception with employees at the Woodbury Post Office Friday (July 20). “It really has gone fast and that is probably because I have enjoyed it so much. I have enjoyed working for the Post Office and serving the people.”

There is a great deal Freeman will miss regarding the postal service but relationships and friends will be at the top of the list.

“I will miss my people (at the post office), but I will miss the personality and the people in town more than I will know,” Freeman said. “I have made some real good friends in Woodbury and Cannon County. The people have been super nice and they have always treated me with dignity and respect. I will the people the most.”

Freeman said that after 40 years retirement is not something he welcomes but also will make the most of it.

“I’m really not ready to retire but it is just time for the flag to swap hands,” Freeman said. “I just know I will miss the people.”

Freeman has spent the last six of his 40 years in the profession serving as Woodbury’s Postmaster. He also worked in Manchester and Murfreesboro prior to making the move to Woodbury in 2006.

Throughout each of his stops and the 40 years he has worked for the U.S. Postal Service, Freeman has subscribed to one practice – working with dedication and pride.

A photo of former Alabama football coaching legend Bear Bryant hangs on the wall in Freeman’s office. It contains one of Bryant’s famous quotes and it is the standard by which Freeman has carried himself.

The quote reads: “If you believe in yourself and have dedication and pride – and never quit – you’ll be a winner. The price of victory is high but so are the rewards.”

“I have tried to go by that,” Freeman says. “It is how I’ve done business and what I go by.”

Regardless of the method, Freeman has been a Postmaster Cannon Countians have been able to count on during his six years leading the Woodbury Post Office.

Print
Members Opinions:
[Delete]
Thanks Jerry for your dedication and good service, we will miss you. The girls at Gas Company
[Delete]
Congratulations upon your retirement. Take time to rest and enjoy life. From a patron.
honeymooner1978
[Delete]
You will be missed more than you know Jerry!!! My grandchildren LOVE coming in to see you and Garl and Linette and you letting them come into your office, seeing your boat pictures and teaching them what a true post office is and how it runs. They were mini-field trips for us, especially since we help home-school them. You have been a TRUE friend and helped me with my PACKAGES more than you know!!! I know you will know who this is and the ‘SPOILED’ stamp will always make us think of you and Garl forever!!! WE LOVE YOU AND WILL MISS YOU and your personality and jokes more than you will EVER know!!!