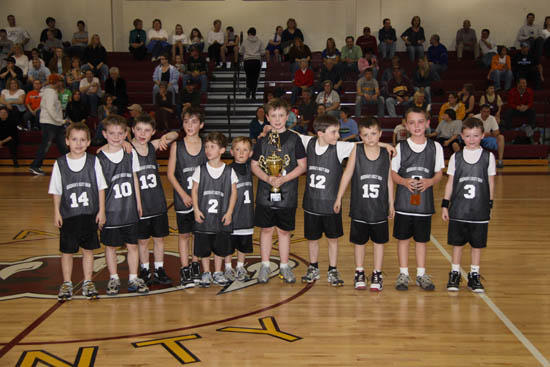 Hindeman's Body Shop lines up with their championship trophy.
The final rounds of the Cannon County Youth Basketball Tournament were held Saturday afternoon at CCHS. All four games were close encounters.

The first final held was between the girls' age 5-8 teams sponsored by Kerry Foster's Heating and Air and Woodson's Pharmacy. Woodson worked their way up to a two point lead at the half and held it through the second. Kristin Fann led the team in points scored. The final score was 14 to 11 and Woodson was crowned the 2010 girls 5-8 champions.

Next up in the boys 5-8 game was Sonic Drive-In vs. Hindeman's Body Shop. Brandon Miles led the offense that won Hindeman the championship. The contest was neck-and-neck at the beginning of the fourth quarter but a string of fouls and good shots put Hindeman on top when the clock ran out.

In the girls age 9-12 championship game Woodbury Funeral Home faced off against Hwy 53 Market. These teams were very evenly matched and there was only a single point difference in their final scores. Competent offense met competent defense in a game that finished 12-11 in Hwy. 53 Market's favor.

Finally the 9-12 year old boys closed their season with a game between Piggly Wiggly and Liquidation Outlets. As with the other games of the afternoon, the boys were well-matched and there was no clear favorite. The score remained close through the game, occasionally seesawing one way or the other by a basket or two. In the last minutes it was still anyone's game until a string of fouls and good shots put Piggly Wiggly ahead 24-20 and Liquidation Outlets simply ran out of time.

(More photos from the tournament will be posted Sunday)

Print
Members Opinions:
aublibrary
[Delete]
Why are the 9-12 year boys not shown in a championship shot.
CannonCourier
[Delete]
Our photographer was unable to line them up for a group shot.