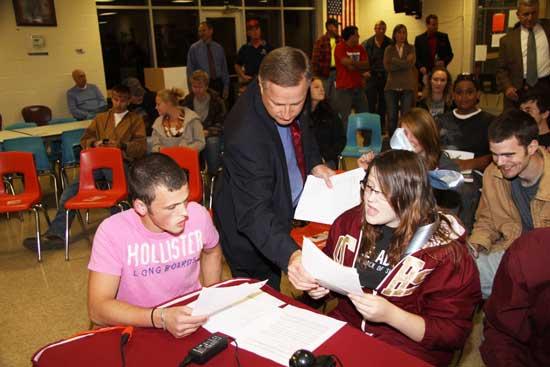 Students in U.S. Government classes at Cannon County High School are doing more than learning about the political process.

They are getting involved.

These students, under the direction of U.S. Government teacher William (Freddie) Curtis, played host to an informative Political Forum at the school's cafeteria Tuesday (Oct. 5) in which candidates for the District 17 State Senate seat and the District 46 House of Representatives answered questions and discussed issues. Election Day is Nov. 2 and early voting begins Oct. 13.

Current District 46 House of Representative Stratton Bone (D) and candidate Mark Pody (R), along with Sen. Mae Beavers (R) and candidate George McDonald (D) took part in the Political Forum, which lasted just more than an hour and was carried live on WBRY.

"First and foremost we want to thank the candidates for participating because we could not have done this without them," Curtis said. "Our students worked hard on the (Forum) and really studied the candidates and current events. They looked closely at the issues facing these candidates and formed questions that concerned them as well as the citizens of Cannon County. They had several different views."

Curtis said questions they had ranged from education to same-sex marriage. Each of the candidates were given an opportunity for a five-minute opening statement. They followed by answering a series of questions from students in the U.S. Government classes, The Cannon Courier and WBRY radio. Doug Combs, owner of WBRY, served as moderator.

Bone, a frequent visitor to Cannon County and its high school, talked about issues closest to its citizens - agriculture. He was instrumental in assisting Cannon County securing funds for an Ag Enhancement Center at the high school.

"Since June 1 there has been $350,000 come into this county and that money has to be matched by the farmer," Bone said. "Then you think about the $150,000 that came here to the school for the (Agriculture) Learning Center. It is approaching $1 million and that's nothing to sneeze at. If you have $1 million new money coming into your county that is a tremendous help.

"Agriculture is the No. 1 industry in the state and in most counties in the state. That certainly is true in this county. We have some of the best farmers in the country right here in these counties, but we need to do more to help them."

Candidates varied on their emphasis on topics during opening statements; however, Beavers opened by telling the large turnout why she believes the upcoming election is highly important.

"We are always glad to get money into the state but that money means that all of you here, all of you young people, are already facing a $44,000 debt just because you are a citizen and that's because of the outrageous spending going on in Washington. Just like you save for your household, we need to be saving for the state because you never know when the revenues are going to be down like they are now. The state needs to live within its revenue just like you do when figuring a budget for your household. You don't spend more than you have. We have to quit spending more than we are taking in."

McDonald, Beavers' opponent for the state senate, talked to the students in the audience about the importance of public education and his support of it. He also talked about the need for better roads in Cannon County.

"We have to have infrastructure," McDonald said. "Anybody who stands up and says our roads in Tennessee are in great shape have not driven through Highway 53, or from Auburntown to Woodbury, or Short Mountain Road to Woodbury. These roads are dangerous and they are out-dated for the economy we live in."

Pody emphasized his ability to recruit businesses and new jobs to the county.

"Eighty percent of the people working here in Cannon County have to leave the county to find a job and that's night right," Pody said. "We can fix that. One of the things I can do is recruit businesses here. I believe it is one of the biggest issues."

Following are questions asked of the candidates and their responses:

Do you support the distillery on Short Mountain in order to bring more jobs to Cannon County and surrounding counties?

Beavers: When I was here for the Renovation of the Square Celebration they were passing around the petition and that's the American Way. I think enough people signed the petition to get it on the ballot. If the people of Cannon County want that, then I'm all for it. That's your business.

McDonald: In this state it is legal to produce win and if that's what the people of this county so desire then the people closest to the government in this county know what you want.

Bone: We try to represent the local county commissions. If they request us to do something then we try to follow suit of what they want done.

Pody: It's a local issue. The less state involvement the better.

How do you plan to help small businesses become successful in this down economy?

Beavers: You keep taxes low and keep regulations off small businesses and make sure they are able to exist and not have to close their doors during bad economic times. This way they can expand their businesses and have the money to hire people.

McDonald: We've got to cut the excessive red tape. We give incentives to large businesses coming into our state. We have to do exempts for those folks employing eight-to-10 people. Those small businesses are truly the economic engine that drive our state.

Bone: We will continue to help small business people. One thing we can do is shop at home. Support your local businesses. It is very important to try and help them and one of the biggest ways is to shop locally.

Pody: I want government out of the way. I don't think government helps small businesses at all. As I talk to business people and ask why they don't hire somebody they are worried about what is the next thing government is going to throw at them? I have an idea that will not cost the state anything. It is money we are already using that will help small business as well as lower unemployment.

For example, if you have a business and there is somebody already on employment, let's say making maybe $250 a week and they can't find a job. Then we reallocate that same money to  a business that will hire them. Let that business use the $250 and leave it on a few months to give that business a chance to hire somebody. The business becomes more profitable and gives the person who is unemployed a job. If the person doesn't show up for work then the business will let them go and they will not be able to draw that unemployment. You have to think outside the box."

What is your opinion of welfare?

McDonald: Welfare is something that concerns all of us here because of the cost involved. We do have people who truly need that. When people are going through tough times we don't need to kick them because they are down. We need to help re-educate them, help train them. There are those who need it and there are some who are milking the system and they need to be identified and dealt with individually instead of punishing everyone.

Bone: I'm certainly in favor of helping people who need that help. There may be some who do not need it but anyone who is down and out, I want to help them. In the last few years with the recession going on we get a lot of calls to our office, people out of work, people who have lost their health insurance, they are behind on their house payments, things are just difficult. We need to help in every way we can and a lot of this comes back to jobs in our communities. We need to create jobs to put people to work.

Pody: I don't like the system we have; I don't like it at all. I am not for the continued hand-outs. I want to give someone a handout if they need it but if I see someone and their mother is on welfare, their kids on are welfare and their grandkids are on welfare, then I think we have a problem with the system. What we need instead of welfare is a job fair program where every person who wants to work has a chance. Welfare doesn't teach anyone anything except they can be reliant on government.

Print
Members Opinions:
Leatherneck
[Delete]
Very refreshing to see these young adults actively involved in assessing the Candidates web sites and their perspectives, on a wide range of issues facing us all. Students-I salute you!

Freddie Curtis-an awesome job getting the students engaged and involved in government issues and personalities. The forum was well organized and fair and balanced too!

Thank you WBRY and Cannon Courier and to all who participated in this event. You helped to illuminate the issues, the candidates and their respective positions.

Many of our Nation's Founding Fathers were in fact, men of great faith. Liberals would have you believe otherwise-but read for yourselves.

Some voter guides to consider, just highlight-copy-paste to browser;