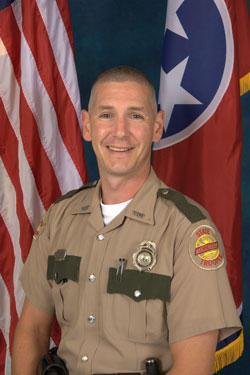 Wade Williams waived his right to a criminal indictment and was formally charged Wednesday morning by a criminal information in Pickett County. Williams is charged with two counts of aggravated statutory rape (class D felony), sexual exploitation of a minor (class C felony), and two counts of especially aggravated sexual exploitation of a minor (class B felony), which is a non-paroleable offense. According to the criminal information, the victim in this case is a female minor under the age of 15.

Williams turned himself in to the Picket County Sheriff’s Department Wednesday morning. He has been released on a $100,000 bond.

The charges stem from an investigation conducted by the Tennessee Highway Patrol’s Criminal Investigation Division and District Attorney York’s office. The case originated from a complaint received and initially investigated internally by the Department of Safety and Homeland Security’s Investigative Services Bureau.

“These charges are the result of a thorough and complete criminal investigation. I want to thank the Tennessee Highway Patrol for their assistance in working with investigators in my office on this case,” York said.

“A charge of this nature is always disturbing, but it is particularly so when a law enforcement officer is accused. This type of behavior does not represent the men and women who put their lives on the line to serve and protect the citizens of Tennessee,” Gibbons said.

On January 30, 2012, THP Colonel Tracy Trott recommended the termination of Trooper Williams following the initial review of the facts and the pending criminal investigation. Williams resigned in lieu of termination and waived his right to any civil service appeals.

“Upon receiving information about Trooper Williams’ conduct, we immediately began an internal investigation that led us to contact District Attorney York. This type of behavior will not be tolerated in the Tennessee Highway Patrol,” Trott said.