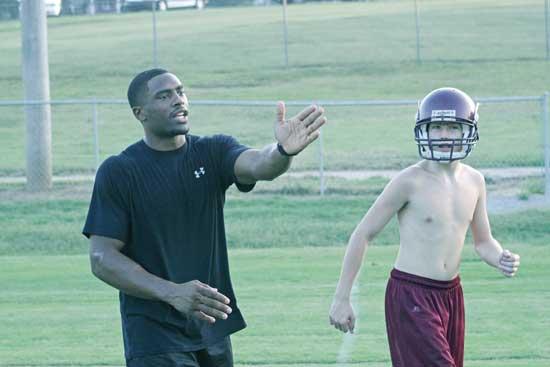 Harris, who assisted with the JR Lions in 2010, played at MTSU from 2003-to-2006 and helped lead the Blue Raiders to the Motor City Bowl in 2006 - the program's first appearance in a bowl game as a Division I-A member.

"Coach Harris brings excitement, energy and tremendous knowledge in the weight room and on the field," Cannon County Head Football Coach Joel Schrenk said. "He has developed a great relationship with the kids. He is just a great guy and a very good football coach."

Though Harris is a first-year coach with the Lions at the high school level, he already has a working knowledge of the freshman class, which is 22 players strong, after working with the JR Lions in 2010.

Harris will coach defensive backs and X and Z receivers for the Lions in 2011.

"It's a great opportunity and I am excited to be here helping these guys," Harris said. "They are ready to get better and it's been great working with the players and seeing their progress."

MTSU Head Football Coach Rick Stockstill said Harris will be a great fit at Cannon County and has a lot to offer.

"I'm glad Jonathan is going into coaching," Stockstill said. "Sometimes you can see things in athletes that make you think they would make a heckuva good coach, and Jonathan was always one of those guys. He studied extra film, he did a lot of things on his own to develop himself as a player, and he was a very smart and a very good player. Jonathan did the things that gave you an idea he would be a coach one day.

"Jonathan has great passion, he's enthusiastic and he will be a great influence on those kids, not only as players, but as young men, too. I'm happy for him and Cannon County has itself a great man working with those players."

Harris, who played safety for the Blue Raiders, capped his MTSU career with 119 tackles, nine for loss, two interceptions and three sacks. He started and played 12 games at safety in 2006 and was voted one of four permanent captains by his teammates.

A Montgomery, Ala., native, Harris helped lead Jefferson Davis to the 2002 state football championship game in 2002. He says his prep and college careers are similar to what Schrenk is building at Cannon County.

"During my high school career we went from a losing season when I was a sophomore, to making the playoffs and getting beat in the first round as a junior, to reaching the championship game as a senior," Harris said. "When I went to MTSU we were building a program as a I-A member and by my senior year we were in our first bowl game.

"We are working to make those strides at Cannon County. It takes a lot of hard work and everybody buying in and everybody believing in that. It's just like anything you do in life, you have to work hard at it and you have to do a little extra sometimes as a player, even when no one is looking."

Schrenk initially took notice of Harris as an assistant with the JR Lions.

"I watched the JR Lions play their first game and after that game I went and told coach Harris that I know he didn't know me but I was the head coach at Cannon County and that he needed to be on the high school level," Schrenk said. "He's a great football coach and has a lot to offer."

After the completion of the JR Lions season, Schrenk meet with Harris to discuss the possibility of joining the staff at Cannon County.

"It worked out where he could come help us and he's been a great addition," Schrenk said. "He's working hard and he has a mentality that it doesn't matter what grade you are in, but can you do what we are asking you to do? Whoever does it the right way and the best way needs to be playing and that's a plus."

Cannon County will continue preseason practices this week with a scrimmage scheduled against White County Thursday in Woodbury.

Print
Members Opinions:
[Delete]
I come to know Coach Harris last year as a parent when he was an assistant coach with the Jr. Lions. The players have a lot of respect for him. He takes time and has patience with each player he instructs. He demonstrates passion, technique, physical ability and achievement that our Lions need to see. He is a wonderful roll model and our boys are amazed how he can run like the wind. I am excited about Cannon County Lions football. The future looks bright here for the next few years. Good choice Coach Schrenk!