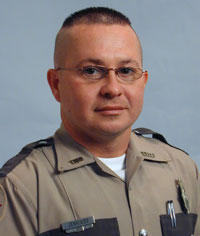 JENNINGS
NASHVILLE — The Tennessee Highway Patrol (THP) today named Trooper Donald “Dewaine” Jennings as the 2009 Trooper of the Year. The announcement was made during a special ceremony Thursday, April 22, at 10:00 a.m., at the THP Training Center located at 283 Stewarts Ferry Pike in Nashville.

Trooper Jennings, assigned to DeKalb County in the Cookeville District, was named Trooper of the Year for an act of heroism on December 13, 2009. He responded to a traffic crash where he found a vehicle submerged on its top in a rain-swollen creek. The creek water was high and the current was swift. Nobody at the scene had checked to see if there was an occupant inside the vehicle.

Prior to being commissioned as a State Trooper in 2007, Jennings worked for the McMinnville and Woodbury Police Department’s and the Cannon County Sheriff’s Department.

“These dedicated Troopers represent the outstanding achievements of the men and women of the Tennessee Highway Patrol,” said Safety Commissioner Dave Mitchell. “They are being recognized for their hard work, enforcement activity, and daily commitment to keeping Tennessee and its citizens safe.”

“Every single day, Commissioner Mitchell and I receive an e-mail, card, letter, or phone call about State Troopers across Tennessee making a difference in the lives of citizens,” said THP Colonel Mike Walker. “These nine Troopers recognized today are examples of the Tennessee Highway Patrol’s professionals who have served Tennesseans for more than 80 years.”