For A Fun Time, Go See The Foreigner 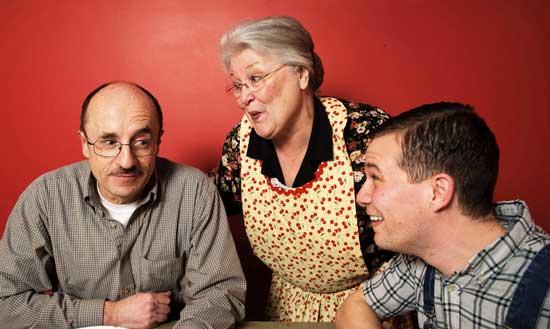 From left are cast members Mike Reed, Becky Coutras and Justin Winton. Photo by Russel Mobley.
The walls don’t have to talk; everyone else is already sharing more than they should!

Laughter and hilarity are in abundant supply as our favorite southern comedy returns to the Arts Center stage with Mike Reed as Charlie, a terribly shy man who seeks peace and quiet in a rural backwoods lodge.

The Foreigner is set in rural Georgia where two English men, Froggy and Charlie arrive as guests. “Froggy” LeSeuer, a British demolition expert, has brought along his pathologically shy friend, Charlie. When people at the lodge try to talk to Charlie, he cannot find words due to his terrible shyness.

Before departing, “Froggy” tells all assembled that Charlie is from an exotic foreign country and speaks no English.

Once alone, the fun really begins as Charlie overhears more than he should. Charlie’s little white lie fuels the nonstop hilarity of this play as situations conspire to turn Charlie's holiday from himself into a self-discovery of humor, good-nature, even heroism and sets up the wildly funny climax in which thing go uproariously awry for the “bad guys.”

Print
Members Opinions:
cabe
[Delete]
Good show this would make about ten years since the last run with Mr Reed right?
susunichols
[Delete]
Mike Reed was cast as Charlie Baker in "The Foreigner" March 1987. He is so funny - Comment by a fan of our Cannon County comedian Don Knotts.