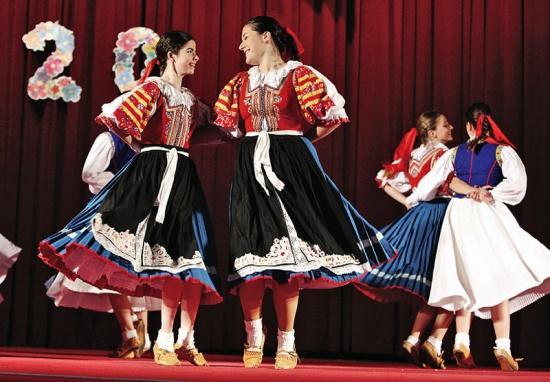 Dance groups from around the world visit Middle Tennessee again this year for the 2010 International FolkFest.

Groups from the Slovak Republic, Curaçao and Italy will join our own Cripple Creek Cloggers June 13-20. Throughout the weeklong event, the groups will tour Middle Tennessee with several public performances.

“The Curaçao group will bring music and dance akin to South America, since their island is near,” FolkFest director Steve Cates said. “Italy is always a crowd-pleaser with lively dancing and an especially good band. Slovakia brings singing as well as dancing.”

This is the first time a delegation from Slovakia will visit during FolkFest, but Italy is a frequent guest and Curaçoa made the trip in 1983.

The Slovakian delegation will perform a variety of traditional dances from several regions across its country.

The Italian group will bring its tradions from Lombardy, a region of northern Italy with “folk songs in ‘Bergamasco’ dialect and typical dances celebrating life style country people,” according to the group’s website.

The group’s traditional dances are very lively and often include props like ribbons, umbrellas, flowers, sticks and scythes.

Located off the coast of Venezuela, Curaçoa brings a rich folklore that combines Native American and European traditions. The group will perform traditional dances like the Waltz, Mazurka, Tumba and Tambu while playing accompanying music.

“We have a wide range of possibilities for seeing all four groups in various types of performance venues this year,” Cates said.

Form Manchester to Nashville and stops in between, the groups will perform many time for the public, not the least of which will be June 19 at Cannonsburgh Pioneer Village on Front Street.

“Beginning at 10, there will be shows every 30 minutes or so, with the last performance beginning at 4 p.m.,” Cates said about the final performance, adding the traditional exchanging of gifts will be at noon and many vendors will be on hand.

To learn more about each group, visit www.mboro-international-folkfest.org.