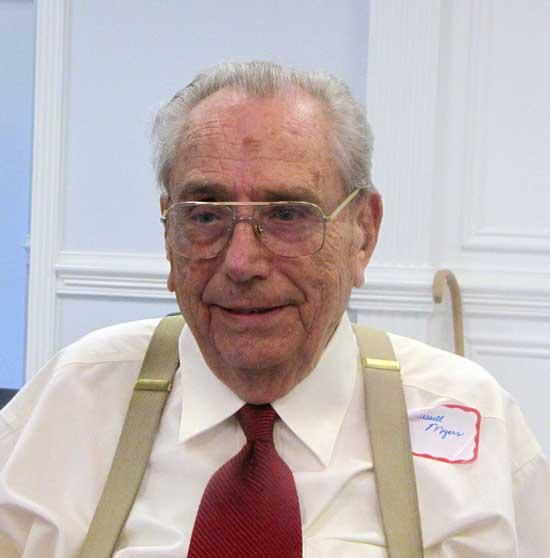 Dr. Russell E. Myers, 93, is believed to be the oldest veteran in attendance.
Several veterans were recognized for their service to country during the annual First Freedom Festival at First Baptist Church of Woodbury Thursday (July 1).

Military representatives were on hand as each branch of the military was recognized during the event. The event attracted hundreds of supporters, including military that had just returned from the war zone in the Middle East (Jennifer Duggin) to veterans who served in World War II.

Those in attendance enjoyed fellowship, a mixture of Fourth of July fare including hot dogs, barbecue, baked beans and potato chips. Later, the people were entertained with a variety of Patriotic songs in the auditorium of the church. The children, ages 3 and up, did a great job with the medley of service songs.

Mayne Mooneyham was regarded as the oldest veteran in attendance at 90 years of age. That was until Dr. Russell Myers came into the fellowship hall at age 93. Dr. Myers, who is now blind, served as a Captain in the Army Air Force as a Flight Surgeon at the end of WWII.

A big thank you to Dr. Myers and all the Veterans that have served their country well in the past to today from First Baptist Church in Woodbury.

Print
Members Opinions:
PurpleHaze
[Delete]
Thanks to all of the Veterans, and to those men and women still defending of freedoms