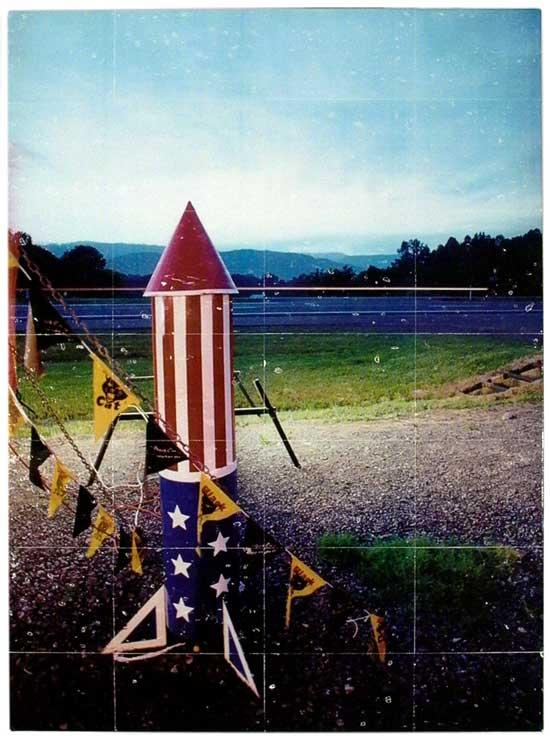 NASHVILLE – Every summer for two short weeks it becomes legal to sell fireworks in Tennessee – and fireworks stands sprout like mushrooms along rural highways all over the state.

Since 2004, Nashville artist Heather Lose has spent summers photographing these Tennessee fireworks stands and their proprietors. Her work will be showcased in an exhibit at The Arts Center of Cannon County from September 16 through October 31.

Lose has transferred each of the images in the exhibition from a photograph to a canvas, a laborious process that makes each piece one-of-a-kind.

“Photography can be about exact reproduction, but putting these images on canvas gives each one a tactile quality and a uniqueness–the hand of the artist is evident,” Lose explains. “It’s part of what gives the exhibition its name, From Canvas to Canvas. Also, most of the fireworks stands are under canvas tents, so there’s a double meaning there–I’ve returned to these places year after year to capture these images.”

“It’s obvious, as you’re looking at these, that I’ve worked on them long after that split second when the camera shutter goes off,” she says. “The work isn’t under glass, and it’s not in ornate frames. Each one has texture and visible brush strokes, and you can’t hurt them by touching.”

“One of the things I envisioned when beginning this project was taking the work back to the small towns I’ve encountered along the way. I’ve shot fireworks stands in Smithville, Manchester, Morristown, McMinnville, Watertown, and on the John Bragg Highway. It’s an honor to bring my work to Woodbury, with its rich artistic heritage.”

“We’re honored to have Heather Lose’s work hanging in the Marley Berger Gallery,” says Evan Hatch, the Arts Center’s folklorist and curator. “She celebrates her subjects, and that fills every part of her canvases. She admires the creativity and ingenuity of the folks who run these operations, and effectively demonstrates the strong lure the fireworks stand holds over its patrons. Lose’s work invites the audience to view these images, like a child on July 3rd with a pocketful of money to spend.”

As an artist, she works in photography and graphic design for print and the web, but her personal work is predominantly centered around documentary and environmental portraiture photography. Lose programs and hosts a radio show, the Honky Tonk Jukebox, on WRVU Nashville. Lose has posted a YouTube video with images and audio from the Tennessee Fireworks Project at http://www.youtube.com/watch?v=mz3EkL7nX9Q.

About the Arts Center of Cannon County

The Arts Center of Cannon County is located on Hwy. 70S approximately 1 mile west of the town of Woodbury, 15 miles east of Murfreesboro and 40 miles southeast of Nashville. The Arts Center is open, 10AM-4PM Monday-Saturday and more information is available at 800.235.9073 or www.artscenterofcc.com.