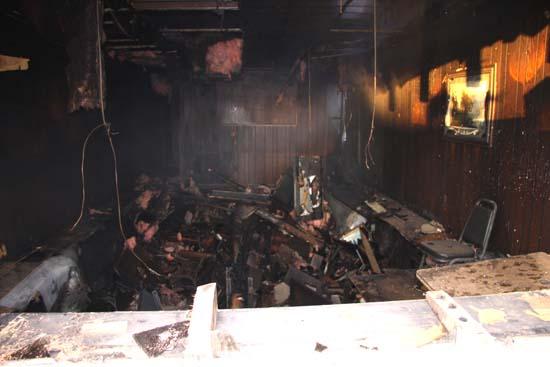 The fire caused extensive damage to the interior of Fine Swine Bar-B-Que
A fire which destroyed a BBQ place in downtown Woodbury Thursday night briefly reignited around 5 a.m. Friday morning.

Woodbury firefighters quickly got the fire under control but were continuing to monitor the situation until shortly before 8 a.m.

Woodbury Fire Chief Bill Johnston said this morning the cause of the fire, which gutted the interior of J.P.'s Fine Swine Bar-B-Que on Tatum Street, may have been electrical in nature.

"We don't know how it started yet but it could be electrical," Johnston said. "The wiring in the building along this (Tatum) street is very old."

Johnston said it appears the fire started towards the back, upstairs portion of the restaurant and then worked its way down to the ground floor.

The cookers for the BBQ business are located in the basement of the eatery. Smoke billowed out of the front door and rear windows of the building for hours Thursday night. Firefighters used fans to clear out the smoke.

"There is so much stuff in there it would have been a wonder had it not started back (this morning)," Johnson said.

Other than the extensive damage to J.P.'s Fine Swine, the only other harm caused by the fire was smoke and water damage to the Melton Law Firm, which is located next door.

Joe's Place's restaurant, which had cleared much of it's furnishing's out Thursday night, was open for business this morning. Owner Randy Barrett said he stayed there all night and was the first one to notice it had reignited.

"We were fortunate we were able to contain it the way we did," Johnston said. "We really appreciate all of the help we had."

Assisting the WFD in putting out the fire were volunteer fire units from East Side, West Side, Mooretown, Walter Hill and Manchester, Johnston said.

Johnston said no firefighters sustained injuries in the course of putting out the fire. "Everybody did a great job and nobody got hurt."

Arson is not suspected as a cause, Johnston said.