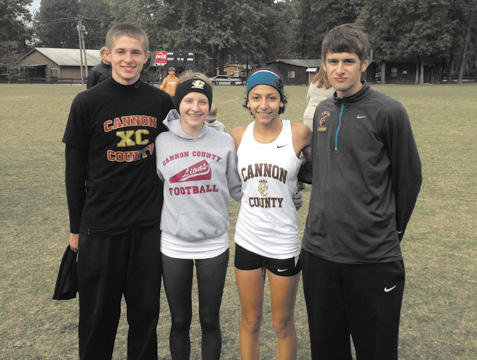 Cannon County will have four representatives competing in the TSSAA A/AA Cross-Country Championships. From left, Marshall McReynolds, Hannah Whited, Elva Magana and Jordan Turney will be competing amongst the state’s best after their strong showing at t

All four runners qualified as individuals. The top three teams advance, along with the top 10 individuals not on one of those teams.

“The good news is we have four students running in the state meet,” Cannon County Head Cross-Country Coach Marc Larson said. “All four put together quality performances at the region and earned this opportunity.”

It marks the third straight year Cannon County has had representation at the state meet. The program also is in its third year of existence.

The bad news for Cannon County is that it was on the threshold of sending both teams to state; however, both the Lionettes and Lions finished fourth - just one spot of advancing as a team. Both finished just behind teams that were added to the district this year - Macon County on the girls side and Merroll Hyde on the boys.

“It’s a bitter pill to swallow with all of the work these kids have put in but sometimes life has some bitter pills and you just have to take them to make you better,” Larson said. “It was tough to be that close and fall short but it also is a testament to the hard work and dedication these students have made to reach this point in our program in three years.”

Magana, a sophomore, will be competing in her second straight state meet. Whited, a sensational freshman who has burst onto the scene with eye-popping results, is making her first state appearance. The A-AA Girls State Championship is at Steeplechase in Nashville at 1:40 p.m. Saturday.

McReynolds and Turney will also be making their second straight state tournament appearance. Turney just missed on making it all three years. He suffered an illness and was unable to finish as a sophomore when he was on pace to qualify.

McReynolds finished fourth overall (out of 84 participants) in the Region 4-A/AA Championship. He ran the 5,000-meter course in 17:16.34 - 23 seconds off the championship pace.

Turney also was outstanding with a Top 10 finish. He was eighth overall with a 17:44.48 for the Lions. Cannon County missed out on advancing the entire team by just 14 points. Central Magnet won the Region 4-A/AA title with 22 points, followed by Signal Mountain (92), Merrol Hyde Magnet (97) and Cannon County (111).

Whited finished fourth overall for the Lionettes out of 68 participants on the girls side. Whited turned in a 20:12.67 to advance to state.

Magana was ninth overall and ran a 21:07.26 to punch her second ticket to the state meet.

The Lionettes were fourth overall with 118 points, finishing behind Signal Mountain (28), Central Magnet (69) and Macon County (84).