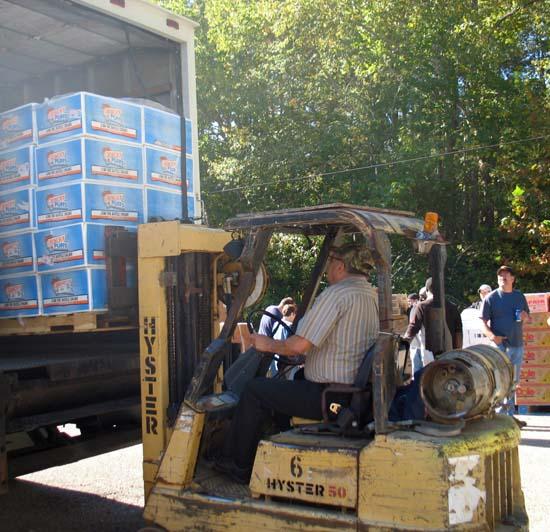 Volunteer Paul Young unloads a shipment of food from Feed America First at Petra Ministries in Selmer, Tenn., on Thursday, Oct. 14, 2010, to help feed families in need.
As Thanksgiving approaches, the staff of Feed America First (FAF) would like to give thanks to the hundreds of volunteers and donors who have helped them bring in the harvest throughout the past decade.

Based in Murfreesboro, FAF helps feed more than 20,000 families every month in 59 counties across Tennessee, Alabama and Mississippi, by providing donated food free of charge to 221 small agencies already dedicated to feeding the hungry. FAF is celebrating its 10th Anniversary this year.

In Cannon County, FAF provides food to the following organizations, which then distributes food to local families in need:

FAF is a non-profit organization with a staff of only three people, so the tremendous impact the agency has had in the past 10 years is due largely to the willingness of individuals and businesses who donate food, time and money to the effort.

“Hunger will cease to be a problem in America when we refuse to allow our neighbors to go hungry,” said Tom Henry, founder and executive director of FAF.

Volunteers are needed weekly at the Murfreesboro distribution center, located at 315 Murfreesboro St., and each month at three regional drop-off locations, located at Petra Ministries in Selmer, Tenn., Loaves and Fishes in Sheffield, Ala., and Salem United Methodist Church in Cookeville, Tenn.

From these four locations, cases of food are handed off once a month to representatives of the 221 hunger relief agencies served by FAF.

Prior to FAF, Henry worked in the restaurant industry for 30 years, and helped to build a single restaurant into a chain of 74. He moved from Atlanta to Franklin, Tenn., in 1990 to become a regional manager for that chain.

A few years later, Henry was inspired by the book “Halftime,” by Bob Buford, and realized the difference between success and significance.

“I fell short on the significance side,” Henry said. “Up to that point, my charity involvement had been limited to writing checks, and I decided to commit something more than money – my time.”

He began volunteering at a Nashville hunger relief agency called Feed the Children (FTC), and found satisfaction there that he was not finding anywhere else.

“That became the best part of my week because I felt I was doing something significant,” he said.

Henry and FTC director Don Herbert became friends, and together they realized that because most hunger relief agencies were working in metropolitan areas, there was still a great need in rural areas.

Following that realization, Feed America First was chartered in June of 2000.

By the time FAF was founded, Henry had become restless in his restaurant career and wanted to further increase his significance. His problem was that he didn’t know how to leave the company and the co-workers with which he had become intertwined.

“I felt like I would be letting them down,” he said.

Ironically, the company had recently come under new ownership that wanted to head in a new direction, and as it turned out, the new owners let Henry go with a generous severance package.

“That was the answer to my prayers about when to leave and how to leave,” he said. “I’m convinced that was God’s decision because it was beyond my imagination. It was the perfect conclusion to my restaurant years.”

His wife, Linda, took a second job, and with the help of the severance package and frugal living, FAF was able to survive the next 18 months.

During the first year, FAF suffered more adversity: Herbert passed away following a battle with kidney cancer, and although Henry wrote 97 grant proposals, none were awarded.

He had a decision to make.

A big break for FAF came in 2001 when RHEMA Ministries in Savannah, Tenn., offered to let the fledgling organization use its warehouse and donated free labor to feed families in Hardin County. Between July 2001 and the end of that year, half a million pounds of food were distributed by FAF. Then, in another setback, the organization lost its lease.

Just as Henry was beginning to go back through his long list of prior contacts, looking for a new facility, he got a phone call from The Tennessee Foundation, which offered FAF a warehouse on West Main Street in Murfreesboro, where FAF would remain until 2008.

During the next seven years, a few staff members were added.

In 2004, his daughter, Chelsea, graduated from college and joined Henry, who had been working solely with the help of volunteers for the first three years. She did everything from writing grant proposals to driving a forklift, and the agency’s footprint grew.

In 2006, Stewart Orell joined the staff, and in 2008, Steven Carter joined the staff , replacing Chelsea. Henry, Orell and Carter remain the only paid staff of the agency today, and that fact, along with volunteer support and donated equipment, helps to put more food in the mouths of the hungry.

“Over the past 10 years, for every dollar donated, we’ve been able to provide enough food for 12 to 15 meals,” Henry said. “Our overhead cost of less than 10 percent places us among the most efficient charities.”

In 2008, FAF moved into its current location at 315 Murfreesboro St. in Murfreesboro, and the operation has continued to grow. There has been a steady increase in food supplies, and has hit its fastest growth rate to date.

This year, Henry expects to give away more than 5 million pounds of food, which is 50 percent more than its best previous year.

Henry and the FAF staff have learned several lessons over the years, which have helped to sustain the growth of the agency’s footprint and increase its significance in its greater community.

One of those lessons has become FAF’s guiding principle: One man’s trash is another man’s treasure.

“Every company has food it can’t sell, and those companies are willing to donate it as long as it’s convenient for them,” Henry said. “Those companies understand that to do well in business, they have to do good in the community.

“In any faith-driven enterprise, you’re only limited by your imagination. God is capable of everything … but his timing is not ours.”

Henry has also learned that there are always people who selflessly serve their neighbors, however small or remote the community might be. Because hunger is a local problem, FAF sets its sights on helping those people who are already helping.

“If we can find those people and provide them food, they can touch more lives.”

WHAT YOU CAN DO:

• Organize a food drive for non-perishable food items at your church or school and deliver it to Feed America First, located at 315 Murfreesboro St., Murfreesboro, Tenn.

• Volunteer your time to help during the distribution at 9:30 a.m. on Thursday, Nov. 18, or on the third Thursday of every month thereafter, at Feed America First.

• Provide financial support by making a donation online at first.comwww.feedamericafirst.com , setting up an auto draft from your bank account, or mailing a check to FAF at 1105 Blue Springs Rd., Franklin, TN 37069.