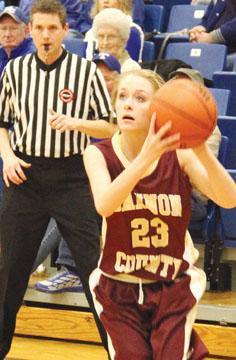 District 8-AA coaches were off the mark in their preseason predictions.

Picked to finish fifth in a preseason poll of league coaches, No. 2 Cannon County (26-2, 11-1) clinched a share of the District 8-AA title with a pulsating 83-33 win against outmanned York at Robert A. Harris Gymnasium Friday (Jan. 31).

The Lionettes can clinch the title outright with one win in their final two games. They welcome in the final regular season home game Tuesday. Tipoff is 6 p.m. Cannon County closes out the regular season at Livingston Academy Thursday.

The surging Lionettes have won 11 straight.

“We are playing well as a team,” said Abbey Sissom, who led Cannon County with a game-high 20 points, along with four assists and four steals. “We have stayed focused and we have played some of our best basketball down the stretch.”

It was “Senior Night” for Sissom, Madison Walkup, Rebekah Faulkner, Macy Clements and Taylor Warren.
The group started and finished the game in style.

Clements and Warren combined for six points and were a presence on the boards and defensive end.

“Those girls have put a lot into the program and made a lot of sacrifices along the way,” Lionettes Head Coach Michael Dodgen said. “It was a good way for them to celebrate Senior Night. It was an important district win for us. It keeps us in position to control our destiny and that’s all you can ask going into the final week of the regular season.”

Solid junior guard Erin McReynolds continued her superlative season. McReynolds scored 12 points on 6-of-6 shooting from the field. She did not miss a field goal in two games last week going a combined 10-for-10 against York (6-of-6) and Smith County (4-of-4).

Cannon County shot 56 percent (29-of-52) from the field and left no doubt from the outset.

The Lionettes blew out to a 32-10 lead after the first quarter and pushed it to 50-20 by intermission.