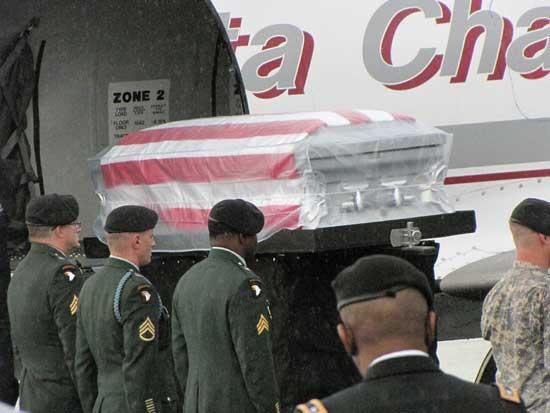 Army Specialist Jeremy L. Brown of McMinnville was flown home Sunday the 16th of May to a huge crowd of supporters awaiting his arrival at the Warren County Airport.

His father, Mac Brown, told The Southern Standard that his son's coaches at Warren County High School always remarked about how good an athlete he was. He played baseball and football and was also on the wrestling team.

There was a huge crowd of people to meet his plane when it arrived at 8:30 A.M.CDT in McMinnville, TN. A large contingent of military and veterans closed in on the airport property. The Tennessee Highway Patrol along with the Warren County Sheriff’s Department was directing the traffic which was moderate for a Sunday Morning in this fertile community where the main economy consists of nursery stock.

His colleagues paid tribute to him during a memorial service that was held in Afghanistan before sending on his way.

The Specialist will be buried Tuesday in Warren County with all Military Honors, High’s Funeral Home is in charge of the arrangements.