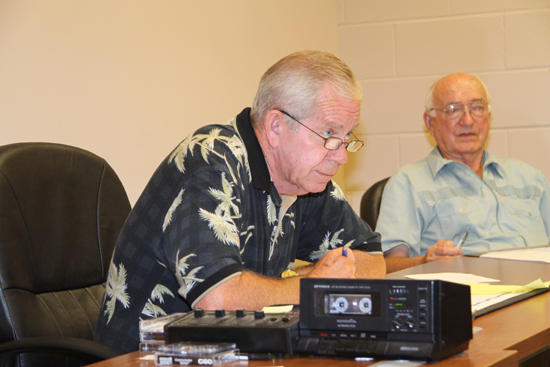 Woodbury Mayor Harold Patrick and Vice Mayor Charlie Harrell discuss business during Tuesday board meeting. (Photo by Sean Parker)
A bit of drama occurred just prior to the start of Tuesday night's Woodbury Mayor and Board of Alderman meeting, but the circumstances remain somewhat of a mystery.

A member of the audience, Doug Bodary, of Old Murfreesboro Road, rose and handed City Attorney Bill Bryson what he (Bodary) said was an ethics complaint against Alan Paschal, director of public works. Bodary then left the building.

When asked following the meeting by members of the media to view the purported complaint, Bryson declined, saying he had not had time to look it over. When asked when it would be available, Bryson was non-committal, but indicated to might be a day or so.

While the specifics of the ethics complaint are not yet known, Bodary is currently engaged in a legal dispute over water and sewer lines and meters on his property with some of his neighbors. The city is not a part of the lawsuit.

During the regular portion of the meeting, the board held several public hearings and then adopted ordinances covering the annexation of property into the Woodbury corporate limits. The board approved the annexation of approximately .53 aces +/- of property located on Tanglewood Drive , Forest Park Subdivision, owned by Jimmy and Tori Lester. It also approved the rezoning of the property from Section 8 to an R-1 (Low-Density Residential) zoning classification, and adopted a Plans of Services for the annexed property.

• The board adopted Ordinance No. 427 following a public heading and second and final reading. The ordinance amends the Woodbury Beer Ordinance so that the distance from beer establishments to places of public gatherings that do not have buildings may also be considered.

• Approved a request by Cannon County Youth Dream to hold part of its annual 5K Run within the city limits. The route for the race will change this year, beginning and ending at the Arts Center.

• Approved a request by Chad Coppinger, Youth Minister of Stone Mountain Church of God, to hold a Youth Rally at Dillion Park on Aug. 22.

• Agreed to reimburse Sharon Odom, owner of Sharon's Unique Boutique, $150 for the cost of repairing flood damage at the business which was caused by a leak in one of the water lines behind the building.

• Adopted a motion made by Alderman Clayton Cason to raise the water disconnect fee on customers living outside of the city limits to $35 from $25.

• Passed a motion made by Alderman Jo Ann Davis to approve Joe's Auto Repair Shop, owned by Joe Duggin, as a car repair shop. At issue is fencing around the property of the business, which could be classified as a junk yard if certain requirements are not met.

Mayor Harold Patrick addressed the board concerning several complaints which he had received from water customers regarding higher rate and usage increases.

"We have had numerous complaints about water rates doubling," Patrick said. "People ask me how you justify it, and I can't. We need to have some type of intelligent answers."

During discussion it was determined that one of the main reasons for the increase in usage has to do with the installation of new water meters, which do a better job of accounting for usage.