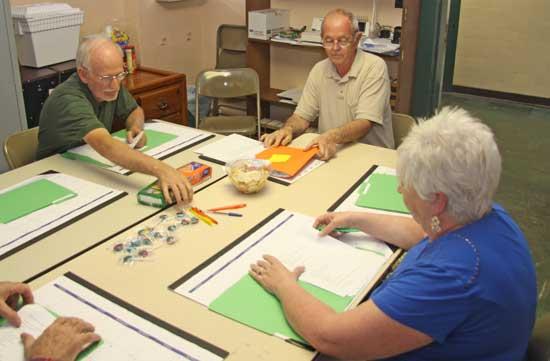 Administrator of Elections Stanley Dobson, center, who was the victim of a recent assault, was back at work Monday, including attendance at the monthly meeting of the election commission. Also shown are election commissioners Jackie Gannon, left, and Louise Mayo.

During its regular monthly meeting Monday night at the Cannon County Election Office, the Election Commission set the dates for early voting for the County General Election.

The General Election is set for August 5. Early voting will begin on Friday, July 16 and end on Saturday, July 31.

The Election Commission also approved the ballot for the General Election during the meeting, which is seven pages in length.

Also on the ballot will be candidates in the primary races for governor, Sixth District Congressman, state house of representative and state senate, plus a variety of other races.

There are a total of 35 candidates in the state primary and 59 in the county election, plus one write-in.

In other business at Monday's meeting, the election commissioners:

• Discussed the possibility of using a new electronic sign-in and verification system for voters at polling precincts during early voting and on election day. They tabled a decision to do so until their June meeting. Administrator of Elections Stanley Dobson said the system would required less poll workers and speed up the voting process.

• Discussed various improvements which need to be made to the election office, including inadequate wiring cited by OSHA, handicapped parking and building access, and security issues related to people who enter the building to visit other agencies located there, including the probation office. Chairman Lindburgh Dennis said he would discuss the problems with County Executive Mike Gannon in an attempt to get them resolved.

• Scheduled their next meeting for June 14 at the election office.

Anyone that would like to request for a absentee ballot can do so starting May 7th. You will need to have in writing your name, address, social security number, the reason for the request and your signature. Forward this information to the Election Office and when it is time to mail you your ballot they will do so. For additional information call 615-563-5650.

Print
Members Opinions:
Straitupmarilyn
[Delete]
Glad to seem Mr Dobson up and about again.. welcome back..