Efforts To Save York Institute Extend Across Globe 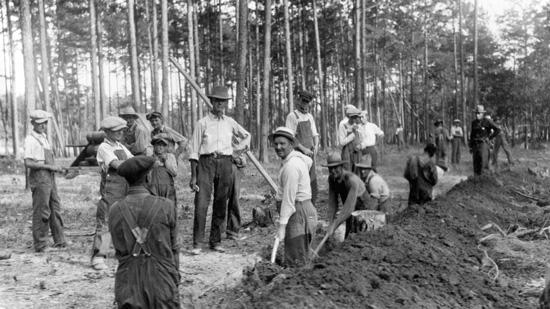 Though Sgt. Alvin C. York’s efforts, which included fundraising on a national scale and twice mortgaging his own home, the school of which he had dreamed, York Agricultural Institute, opened in Jamestown in 1925. York, in the ditch wearing a white shirt in the center of this vintage photograph, was involved in every aspect of the building's construction, including digging its foundation. More than eight decades later the Sgt. York Patriotic Foundation is fighting to save the building from demolition and restore it for adaptive reuse as an educational facility. (Photo courtesy of Sgt. York Patriotic Foundation)

Assistance from throughout the world is being sought to ensure that the school built by WWI hero Sgt. Alvin C. York is saved from demolition, and the Auburntown Historical Society is doing its part to spread the word.

Claudia Johnson-Nichols, executive director of the non-profit Sgt. York Patriotic Foundation, will speak to members and guests of the Auburntown Historical Society Thursday, June 16, at 7 p.m., in the fellowship hall of the Auburntown Church of Christ.

“We are inviting any member of the public who is interested in the story of Sgt. York to join our membership for this special presentation,” said Mary Hughes of the Auburntown Historical Society. “Through screening of a 10-minute video narrated by the late Walter Cronkite, Mrs. Nichols will discuss how Sgt. York’s educational legacy is being preserved. “

Using historic images and vintage film footage, the video focuses on Sgt. York’s life before and after World War I, emphasizing his lifelong commitment to education, which included raising money for a school building used from 1925-1979 to educate the youth of his home area of the Cumberland Plateau.

The building was abandoned when a new school building was built. Although it is listed for its national significance in the National Register of Historic Places, and despite interest over the years in revitalizing it, it fell into disrepair under ownership of the State of Tennessee Department of Education.

The York Agricultural Institute building, which was slated for demolition in 2008 by the state, was the subject of numerous news stories throughout the country and several emotion-filled public hearings on Capitol Hill in Nashville.

After months of struggle, the State of Tennessee agreed to turn over the building to the Sgt. York Patriotic Foundation, a 501c3 organization formed 15 years ago by descendants of Sgt. York, including his three surviving children, and many devotees of the reluctant young World War I soldier from Pall Mall, Tenn., whose resolve in battle brought him world-wide recognition.

Instead of personally capitalizing on his military accomplishments, York, one of the most highly decorated American soldiers to serve in the First World War, looked to the future.

“When I went out into that big outside world I realized how uneducated I was and what a terrible handicap it was,” York wrote. “I was called to lead my people toward a sensible modern education.”

Though York’s efforts, which included fundraising on a national scale and twice mortgaging his own home, the school of which he had dreamed opened in 1925.

“His vision was not limited to the education of children from the remote Cumberland plateau region,” Johnson-Nichols pointed out. “He wanted to include interested adults as well. He set a tremendous example, for he reminded them when he spoke, of his own former limitations, but that by reading, thinking and asking questions, he broadened his own understanding of the world.”

Sgt. York presided over every graduation ceremony until his stroke in 1953, but continued to make regular visits to the school up into the late 1950s, until he grew too frail. When the building was replaced with a more modern facility, neglect took a serious toll on the venerable structure.

With the commitment of the Sergeant York Patriotic Foundation and the cooperation of the State’s education department, the building has been stabalized and will be restored for use once again as an educational facility, both preserving York’s legacy and fulfilling his dream. More than $1million has been spent to save the building, but $4-5 million is the goal for returning the structure to an educational facility, as Sgt. York wanted.

Contact Johnson-Nichols at 931-347-2664 to offer support. Visit www.sgtyork.org to learn more about the Foundation and view photos of the progress being made at York Institute.

For additional information about the Auburntown Historical Society, visit www.auburntowntennessee.blogspot.com.