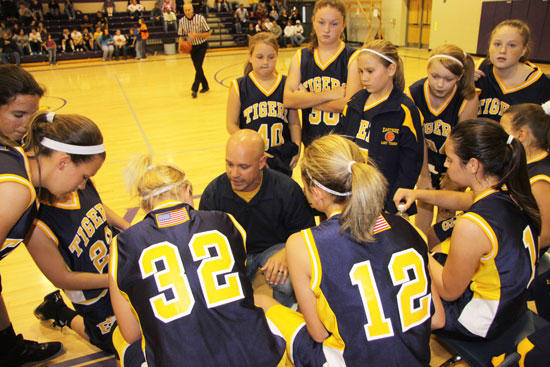 East Side coach Ronnie Arnold discusses strategy with his team during the finals of the 2011 WGS Border War Tournament Saturday (Oct. 29).

East Side's girls are realizing a little confidence can go a long way.

The Lady Tigers were winless during the 2010-11 regular season but started this season with two wins and an appearance in the finals of the WGS Border War Tournament before falling to a stronger DeKalb Middle team, 37-18.

What keyed this sudden turn-around?

"We are more confident," said Kelli Davis, who led East Side in scoring throughout the week and finished with six points in the title game. "We didn't have a lot of confidence last year and we lost every game. We got to the B Team Tournament and that changed everything for us."

The B Team Tournament is a season-ending event at Auburn where county teams participate but do not play their eighth-grade students. Playing on a more level playing field, East Side won the B Team tourney and changed its mentality.

"The entire mentality of our team changed since the B Team Tournament," East Side girls coach Ronnie Arnold said. "Up until then they didn't think they could win but once we got through that tournament they felt good about themselves. They have had that mentality in practice and they are just a totally different team."

East Side swept that B Team Tournament and carried the confidence and momentum into the start of the 2011-12 campaign. After winning its first two games, East Side had a dubious task against an athletic DeKalb Middle team in the championship game.

East Side hung tough early and trailed 12-9 after the first quarter. The Lady Tigers managed just two points in the second quarter as the Lady Saints built a 23-11 cushion that proved too much to overcome.

GIRLS CONSOLATION
West Side 41
Dibrell 31
Autumn King poured in 17 points and Sydney Eldrod finished with 16 to power West Side to a 41-31 win against Dibrell in the girls consolation game of the WGS Border War Tournament.

West Side (2-1) jumped out to a 14-4 first quarter lead and never looked back to cap a strong first week to the season.