Dunn & Donnell Mill Was Hub Of Activity in Auburntown 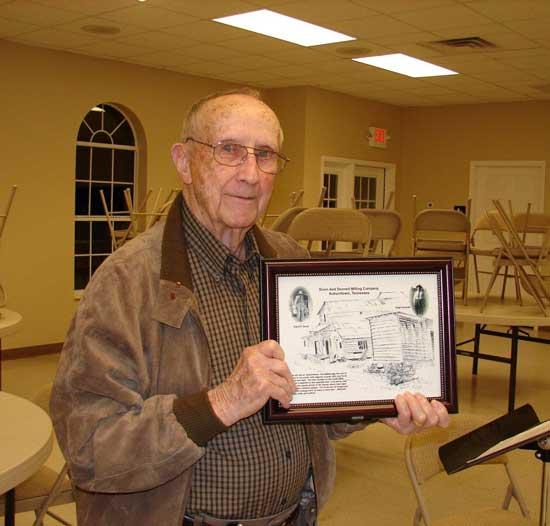 Charlie Mitchel Dunn, whose father C.P. Dunn co-owned and operated a mill at Auburntown for many years, spoke at the March 2010 meeting of the Auburntown Historical Society. Mitchel and wife Irene relocated to their hometown of Auburntown in 1987.
Auburntown resident Charlie Mitchel Dunn, guest speaker at the Auburntown Historical Society’s (AHS) March 2010 meeting, provided his recollections of a grain and sawmill at Auburntown co-owned and operated by his father Cecil Patton (C.P.) Dunn. Information for this article was taken from the presentation, interviews and selected documents.

When C.P. Dunn, wife Essie and their three small children moved to Auburntown in 1923, it was a growing and prosperous community. On land owned by Hugh Donnell, where the Auburntown Community Center now sits, lay remnants of the old flour and feed mill last operated by Bob Taylor. Additionally, according to notes obtained by Mitchel, there was a steam-powered, grist and saw mill in Auburntown during 1878. It was owned and operated by former Smith County citizen Lieutenant B. A. High. Mitchel felt machinery ruminants around the grounds of the Dunn & Donnell business could have been from this 1878 mill operation.

C.P. Dunn entered into a partnership with Hugh Donnell in 1923 to form a mill business known as Dunn & Donnell. A new two-story building with a partial third story was constructed and all usable machinery re-installed. Additional equipment to operate the mill was engineered by C.P. from parts of discarded machinery. Power to operate both a grain and saw mill was provided by a traction steam engine. However, a large steam boiler which provided steam for two steam engines was later installed. A steam whistle was blown daily at 12 noon and again at sundown during mill operations.

In those decades, mills were needed by families to grind dietary staples of corn meal and wheat flour. Dunn & Donnell received a portion of the deposited wheat as pay for milling. From this wheat, the Company produced “Sifted Snow Flour,” in 24 and 48 pound bags. Similarly, shelled corn was transported by customers to the mill to be ground into corn meal. A portion of the corn or “toll” was charged for grinding the corn. Another service provided by the Company, was the grounding of complete stalks of harvested corn into feed for livestock.

Dunn & Donnell Company also sawed lumber for home and barn construction in Auburntown and the surrounding communities. Oak, beech, poplar, walnut, and cedar trees were plentiful. Logs hauled to the mill were sawed and a fee charged for each board foot. When saw mill employees cut timber, landowners got a share of the cut lumber. A team of men using axes and crosscut saws accomplished felling trees and trimming the logs.

The log yard sloped down from the road. Gravity helped workers get the logs onto the mill processing equipment. A scale pen was located on the south side of the mill and a small granary for wheat storage was on the north side. This building is a small red structure that still stands across the road from the residence of Travis and Beth Hancock. The milling operation ceased and the partnership of Dunn & Donnell was dissolved in the early 1940’s. However, sometime after WW 2, Raymond Robinson used the granary to manufacture doll furniture and children’s play equipment. They were marketed to Harvey’s in Nashville and other outlets in the northeast.

There are no known photos of the mill operated and owned by C.P. Dunn & Hugh Donnell. However, Wendell Cooper, Auburn High School graduate of 1947, created a pencil drawing of the mill in 1960. A postscript by the author of his artwork states: “This old mill at Auburntown, TN was the hub of activity in my youth, with wagons of grain and corn to be ground into feed. The mill, located on the creek bank, also had a sawmill on the opposite side. It is sad to visit and see the weeds grown in the places where men used to work and children played. The scale pen at foreground furnished a playground on many a rainy day.”