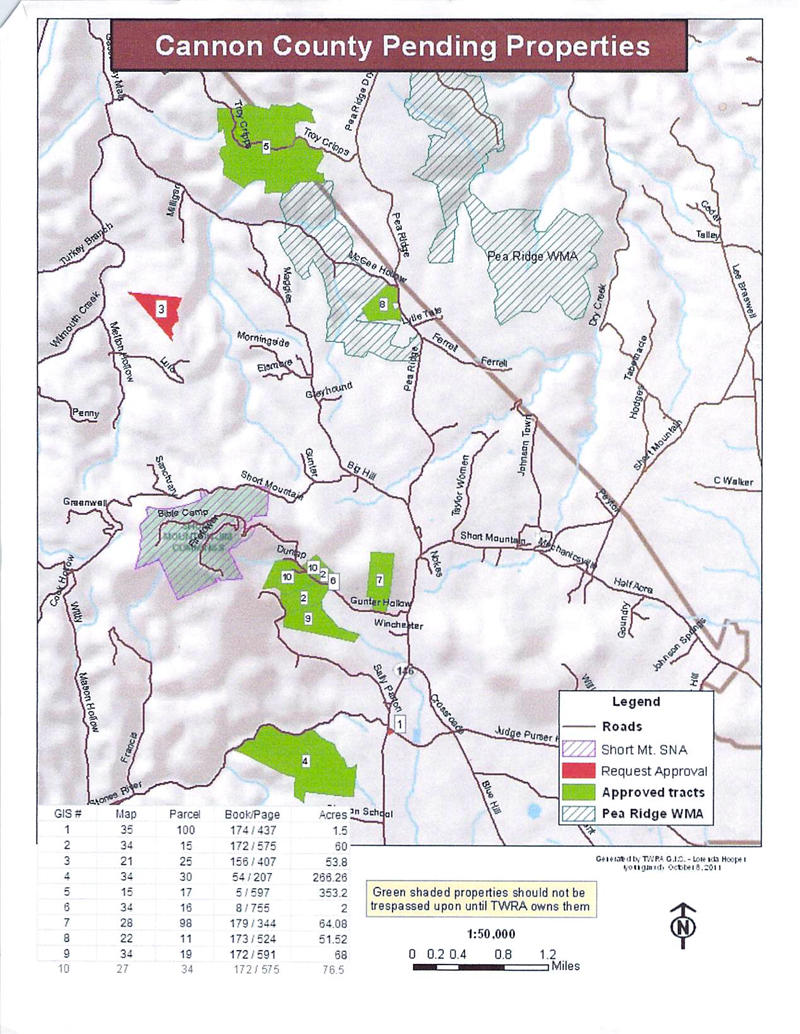 Nearly 1,000 acres of land in Cannon County once owned by convicted drug dealers will soon become public use areas.

The land, comprised of over four separate areas of property, is located on Short Mountain and was forfeited to the federal government during the trial of Morris Roller and Jeffory Carl Young, who were convicted of drug manufacturing and distribution charges in 2007. Both are currently serving time in a federal prison.

The new public use areas will be managed by the Tennessee Wildlife Resources Agency and will initially be available for a variety of public activities, including hunting and wildlife viewing.

Additional uses still under consideration include hiking and horseback riding.

A ceremony to unveil the new wildlife management areas will be held at 10 a.m. on Wednesday, June 13.

The largest area, approximately 400 acres, is west of the current Pea Ridge Wildlife Management Area, off of Troy Cripps Road, and will be incorporated into that existing WMA.

The second largest wilderness area runs mostly along the south side of Stones River Road and contains approximately 266 acres.

Two more new wildlife areas are along Gunter Hollow Road. One has 196 acres, and the other 64 acres.

Following years of negotiations, the federal government gifted the land to the State of Tennessee. The deal was finalized in April.

The land gift from the federal government to the state is only the fourth of its kind under the Controlled Substance Act and the first in Tennessee.

The story is one of something bad turning out for the good.

In 2006, the government named Roller and Young as defendants in a twenty-count superseding indictment. Count one charged both men with a conspiracy to manufacture 1000 or more marijuana plants and to distribute 1000 or more kilograms of marijuana

Roller and Young were tried jointly, and the jury convicted each man in early 2007 of conspiracy involving more than 100 but less than 1000 marijuana plants and more than 100 but less than 1000 kilograms of marijuana. Roller and Young were also convicted of the substantive offenses for which they were charged. The district court sentenced Roller to serve 200 months and Young to serve 224 months in May 2007.

Authorities said Roller and Young had been dealing in marijuana since at least 1992 and had amassed 2,200 acres in 31 different tracts.

After the guilty verdict, Roller and Young agreed on the forfeiture of the 996 acres, which now becomes land which can be used now for nature activities and will be preserved for future generations.

Print
Members Opinions:
tngail
[Delete]
Have all the animals been removed?
choateo
[Delete]
Who pays for the upkeep on this land?
[Delete]
The TWRA is an agency of the State of Tennessee.
[Delete]
Why couldn't some of this property be developed into a park or attraction that would draw visitors to the area? Does Cannon County not need more revenue? It would seem to greatly compliment the Short Mtn Distillery already in operation in this area.

[Delete]
A Wildlife Management Area is considered a park of sorts. From my understanding of the situation the federal government was not going to let loose of the land unless it was going to be used for certain purposes, but I expect more information will be announced when it is officially dedicated June 13.
Copyright © and Trademark ™ The Cannon Courier 2017 All Rights Reserved
Copyright Statement | Privacy Statement | Terms of Service
Woodbury TN
Copyright © 2013 by The Cannon Courier
Powered by Bondware
News Publishing Software