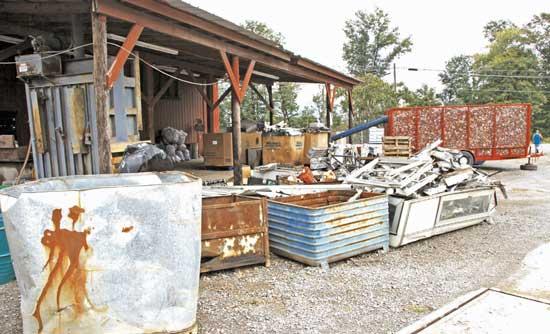 Pelham's Auto Salvage is one area business that buys recyclables, such as aluminum cans and scrap metal.
The problem of trash or garbage is a universal problem and is being addressed by most civilized nations. One of the ways to accomplish this is to recycle. The internet is full of ideas and implemented plans for the act of doing the actual recycling. The only problem left is to get the people to act. A survey commissioned by the Glass Packaging Institute (GPI) revealed that almost 94 percent of Americans think "recycling is good for the environment." Most people are in total agreement that we are poisoning the earth by our trash and that we are depleting our natural resources.

There are universal committees literally working around the globe to help us attain ways to save our planet. The people in the know say the weather is changing due to green house gasses that we are emitting from our vehicles and factories. We see it on an everyday basis happening somewhere on this great orb we call home. Can we turn that tide around? At no time in history are we better equipped with technology or intelligence to handle the situation, than now.

If truth be known this old planet has probably been through thousands of heat waves, ice ages, droughts and a whole host of calamities throughout its history since God created it. But there is no doubt those living, thinking, decision making humans have messed it up with the creation of our time saving products.

Like our plastics and bags and bottles that we leave behind. Dead carcasses of vehicles and appliances that we have used and abused litter junkyards, gorges and waterways.

We know other civilizations existed from a few things they left behind. Their pottery, buildings, bones and weapons tell us of a people that have been before us and who have tried creating a civilization that can preserve their way of life. We have created things unimaginable even one hundred years ago. Computers and their by-products have to have a special type of disposal, batteries also and yes nuclear waste.

"My state's better than your state," should be the goal for each and every U.S. state. Childish? Maybe -- but drastic measures are necessary to curb the landfill and trash issues that the U.S. is facing. Make it your personal goal to see that your state not only stacks up, but surpasses other States in recycling trends. The U.S. in 2005 generated 260 million tons of waste, which was actually 2 million tons less than a year before.

Some states currently offer well-used electronic recycling programs and others need to start them up. One of the best ways to get people to recycle drink bottles is to create bottle deposit regulations, but states differ on this. Using the same two states above, Oregon has a bottle deposit where you receive five cents back for each bottle you take to a deposit facility.

The recycling areas for Oregon are everywhere and are easily accessible in places such as grocery stores. Gallup, New Mexico has a recycling program for plastic bottles where you're paid one cent for each pound of plastic bottles you recycle. The payment per pound for recyclables in Gallup is consistent with the rest of the states' recycling centers. You can take an entire van stuffed, as full as possible, with shredded paper to a local center in Albuquerque, and receive only three dollars for your time and effort.

Which state do you think has better recycling rates?" Back in the early days of the 1950's and early 1960's you could recycle your used glass soda bottles for a penny a piece, and many a young lad would do everything in his power to find every one of them to redeem at the local country store. That kept the roadsides and the roadside creeks clean of that kind of litter.

Now-a-days there are places in Cannon County that buy recyclables, metals such as aluminum drink cans, copper wire and tubing and worn out vehicles. The prices vary from month due to the standard of supply and demand. As of September 17, 2009 Pelham's' Auto Salvage was offering $.45 cents a pound for aluminum cans, (17 regular sized aluminum cans equals approximately one pound.) And for the old vehicles they are giving $7.50 cents a hundred weight for them, said Don Underwood an employee of Pelham's.

Cannon County government also recycles some items, cardboard is recycled as well scrap metal in which they sell the steel to Pelham's. Pelham leaves a trailer down at the Solid Waste (Convenience) Center where the patrons bring their garbage and used metal materials such as old refrigerators, bicycles, stoves etc: and load it. If it is too heavy for them they can leave it on the side and they will lift the articles in there with the yard tractor.

A check with the County Executive's office shows that Pelham's gives $1.25 for scrap metal; the price for cardboard is at present $54.00 a ton which is sold to another company. All the prices fluctuate due to the market value. Gannon estimates that the county will receive for all the metals, cardboard and used oil approximately $10,000.00 a year. This is only getting a slight fraction of what the county pays out to get our solid waste out of the county.

Individual places in Tennessee offer bins for recyclers, one in particular is on the campus of MTSU in Murfreesboro on Greenland Drive on the east side of the campus.

They do not offer glass bottle recycling but they do on papers, books (magazines), newspapers and office supply paper. Computers and televisions The useful life of a computer is only about three to five years. The old computer is often replaced by a computer with a faster operating system, more memory or more features. Many people don't know what to do with their old computer. They may hold onto it as a "back-up" in case the new computer needs repair, give it to the kids to use or put it in the garage.

Computers can be recycled and given a second life. The computer can be given away for use by another individual or organization that may not have the funds to purchase a new computer.

If the computer is not working it can be repaired or broken down for parts or raw materials such as precious metals, plastics and glass. These materials can be reused or disposed of using methods that minimize pollution and global warming.

You can provide computers to individuals and organizations that decide not to purchase new equipment or provide parts and materials that can be used to refurbish old computers or produce new ones.

A local company in Woodbury called PC Disposal takes all computer parts and breaks them down, separating components from each other. They will take all the computers and television units that you need to get rid of. Mike Gannon states that this keeps all that out of the landfill and it has to be treated differently than most other refuge. Computers and television has precious metals and composites that need to be treated almost like hazardous materials. PC Disposal is located on Bryant Lane in an old industrial building once used for shirt manufacturing.

Each fall in Cannon County they usually put on a hazardous waste day at the convenience center to collect household waste such as used paint, poisons, cleaners and greases. It would benefit Cannon County if all of the residents would be in the mindset of recycling.

Things that can be used again will keep the natural resources that are used to create them still intact. It takes less energy to recycle the once used containers that it does to change the raw materials into those containers. We all need to do our part in keeping our environment clean for us and our children.