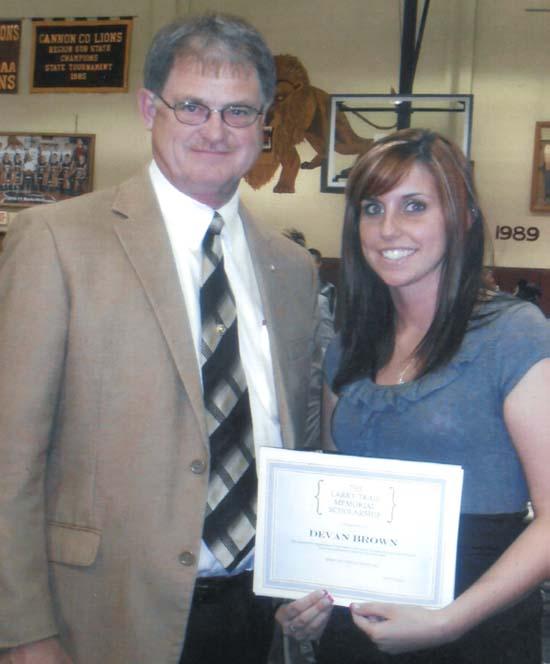 The fifth annual award of the “Class of 1970 Larry Trail Memorial Scholarship” was presented Tuesday (May 17) during Awards Night at Cannon County High School.

Class of 1970 representative, Kenny Gilley, presented the award of $1,000 to Devan Lindsey Brown of 3284 Bradyville Rd., Readyville. She is the daughter of Ed and Pam Brown.

While at CCHS, Devan was active in Beta Club and the Woodbury FFA. She currently serves as president of the local chapter of FFA and was awarded the “Star Green Hand Award” in 2008.

As a member and leader in the FFA, she has been involved in several community service projects including, adopting local and angel tree kids at Christmas time, collecting money for children’s hospitals, and planting flowers in the community.

Devan has been showing spotted saddle horses since age two. In 2009 and 2010, she was awarded the “12-17 Open Shod World Grand Champion.”

As a native of Cannon County, Devan plans to stay in Cannon County and give back to the community by using her skills as a Physical Therapist Assistant in either the nursing home, hospital or in home health care.

The Woodbury High School Class of 1970 established the scholarship fund in memory of class member and former state senator Larry Trail, who passed away August 21, 2006. Members of the class of 1970 are asked to contribute to the fund each year.

Because Larry’s work in the community was so well-known and appreciated, the fund is open to contributions from anyone who desires to do so.

All checks should be sent to CCHS, One Lion Dr., Woodbury, TN 37190. Each check should have the designation – Larry Trail Schlorship.
Read more from:
CANNON COMMUNITY
Tags:
None
Share: