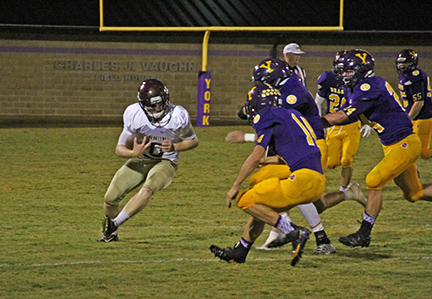 RONNY BURKS, photo Josh Walkup (10) rolls around the right side for a short gain against York Institute.

For the third year in a row, the York Institute Dragons slay the Cannon County Lions by scoring 49 points in a dominating shutout victory.

However, they ran into a determined York squad who played a tough schedule, but was 0-4 before the game.

The Dragons got on the board first one with a 33 yard touchdown on a trick play with 9:01 left in the opening quarter to make the score 6-0.

They finished the first half with a 33-0 advantage, but it could have been more. However, the Lions defense roared to life with a goal line stand with four seconds left before the break.

The second half started with a bad snap through the back of the end zone on a Lions punt which turned into a safety to make it 35-0. The mercy rule was on and York scored two more touchdowns to end the game.

It was the last shutout since Oct. 2015 when it happened to the Lions twice. Coming into the game, CCHS had not beaten York since in 2009, and Dragons have outscored them 255-51 since then.

The Dragons are now 1-4, while the Lions fall to 2-3 at the half way portion of the season.

Next week, CCHS travels to Upperman for a 7 p.m. kickoff.

Print
Members Opinions:
appdancer
[Delete]
Congratulations! (I hope all the negative talk I heard happened from the York supporters was not true!)